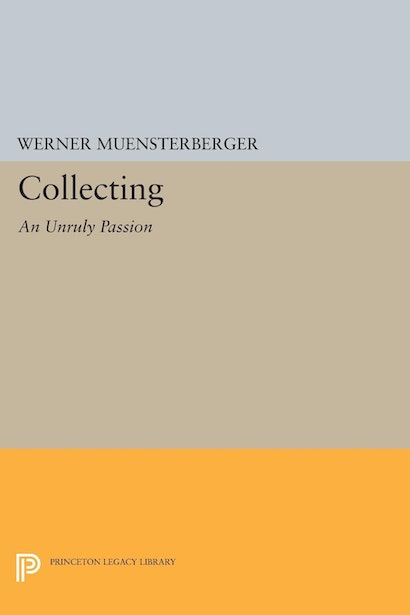 From rare books, valuable sculpture and paintings, the relics of saints, and porcelain and other precious items, through stamps, textiles, military ribbons, and shells, to baseball cards, teddy bears, and mugs, an amazing variety of objects have engaged and even obsessed collectors through the ages. With this captivating book the psychoanalyst Werner Muensterberger provides the first extensive psychological examination of the emotional sources of the never-ending longing for yet another collectible. Muensterberger’s roster of driven acquisition-hunters includes the dedicated, the serious, and the infatuated, whose chronic restlessness can be curbed — and then merely temporarily — only by purchasing, discovering, receiving, or even stealing a new “find.” In an easy, conversational style, the author discusses the eccentricities of heads of state, literary figures, artists, and psychoanalytic patients, all possessed by a need for magic relief from despair and helplessness — and for the self-healing implied in the phrase “I can’t live without it!” The sketches here are diverse indeed: Walter Benjamin, Mario Praz, Catherine the Great, Poggio Bracciolini, Brunelleschi, and Jean de Berry, among others.

The central part of the work explores in detail the personal circumstances and life history of three individuals: a contemporary collector, Martin G; the celebrated British book and manuscript collector Sir Thomas Phillipps, who wanted one copy of every book in the world; and the great French novelist Honoré de Balzac, a compulsive collector of bric-a-brac who expressed his empathy for the acquisitive passions of his collector protagonist in Cousin Pons. In addition, Muensterberger takes the reader on a charming tour of collecting in the Renaissance and looks at collecting during the Golden Age of Holland, in the seventeenth century. Throughout, we enjoy the author’s elegant variations on a complicated theme, stated, much too simply, by John Steinbeck: “I guess the truth is that I simply like junk.”

"What compels some people to buy the same object, albeit in different versions, over and over again? ... To find out why collectors lift their auction paddles long past sanity ... read Collecting: An Unruly Passion."—Art and Antiques

"As a study of the phenomenon of private collecting, Werner Muensterberger's book, based on wide reading and personal acquaintance with many collectors, rings true."—The New York Review of Books