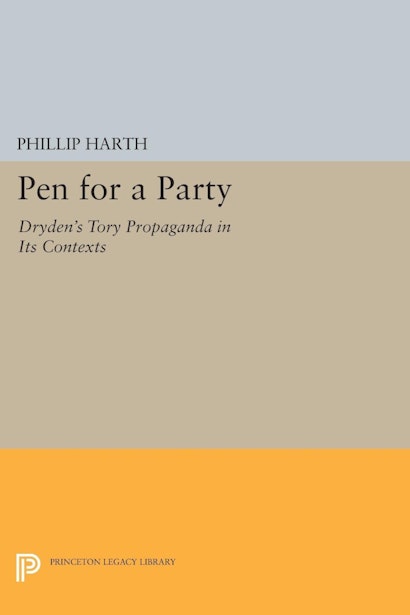 Exploring the political climate during the final years of the reign of Charles II, when John Dryden wrote his great public poems and several of his dramatic works, Phillip Harth sheds new light on this writer’s literary activity on behalf of the monarch. The poems Absalom and Achitophel and The Medall, and the dramatic works The Duke of Guise and Albion and Albanius, have commonly been considered in relation to such public events as the Popish Plot, the Exclusion Crisis, and the Tory Reaction, but that approach does not explain the noticeable differences among these works or the specific purposes for which they were written. Harth argues that the immediate contexts of these works were not the historical events themselves but a constantly developing series of propaganda offensives, both Tory and Whig, designed to influence public opinion toward fluctuating conditions.

Pen for a Party traces the halting process by which the government of Charles II developed propaganda as an effective instrument for gradually winning the public’s acquiescence in its divisive policies. It likewise shows how Dryden fashioned his own works to meet the needs of this propaganda campaign in each of its successive phases.

"Indeed, [Harth's] study is as much about the history of Tory ideology, a history in which Dryden is a critical figure, as it is about Dryden's literary production. Placing the composition of each work in its historical context, Hearth brings greater skill to bear on this task than any previous commentator."—American Historical Review