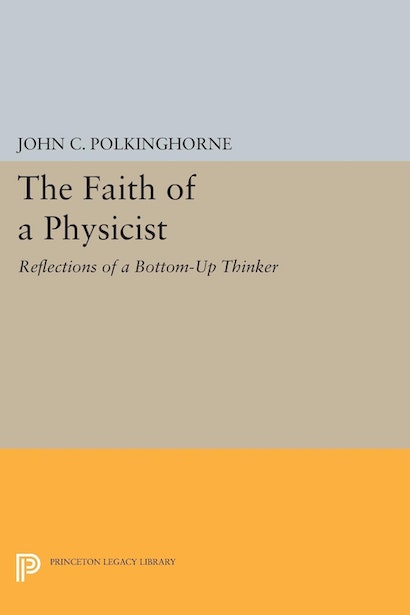 Is it possible to think like a scientist and yet have the faith of a Christian? Although many Westerners might say no, there are also many critically minded individuals who entertain what John Polkinghorne calls a “wistful wariness” toward religion — they feel unable to accept religion on rational grounds yet cannot dismiss it completely. Polkinghorne, both a particle physicist and Anglican priest, here explores just what rational grounds there could be for Christian beliefs, maintaining that the quest for motivated understanding is a concern shared by scientists and religious thinkers alike. Anyone who assumes that religion is based on unquestioning certainties, or that it need not take into account empirical knowledge, will be challenged by Polkinghorne’s bottom-up examination of Christian beliefs about events ranging from creation to the resurrection.

The author organizes his inquiry around the Nicene Creed, an early statement that continues to summarize Christian beliefs. He applies to each of its tenets the question, “What is the evidence that makes you think this might be true?” The evidence Polkinghorne weighs includes the Hebrew and Christian scriptures — their historical contexts and the possible motivations for their having been written — scientific theories, and human self-consciousness as revealed in literary, philosophical, and psychological works.

He begins with the words, “We believe,” and presents understandings of the nature of humanity, showing, for example, that Cartesian theory, evolution, and natural selection do not tell the entire story of what humans are about, especially in light of many sources that attest to our spirituality. Moving through the Creed, Polkinghorne considers the concept of divinity and God as creator in discussions that cover the Theory of Everything, the Big Bang Theory, and the possibility of divine presence within reality so that God is not simply an outside observer. Chapters on Jesus analyze the different ways events are described in the Gospels and the way motivation for belief is conveyed — for example, how do these writings explain why a young man killed in public disgrace could inspire a following, when other major world religious leaders lived to become highly revered elders in their communities?

“Faith seeking understanding” is, according to Polkinghorne, like the scientific quest. Both are journeys of intellectual discovery in which those who survey experience from an initially chosen point of view must be open to correction in the light of further experience. “Religion,” he writes, “has long known that ultimately every human image of God proves to be an inadequate idol.” The Faith of a Physicist, based on the prestigious 1993 Gifford Lectures, delivers a powerful message to scientists and theologians, theists and atheists alike.

"The Faith of a Physicistworks on two levels. On one level it is a straight-forward work of Christian apologetics. On another level it is a meditation on the relationship between science and religion. As a work of apologetics, Polkinghorne's book is a tour de force. It is a thoughtful and thorough defense of the Christian faith.... When Polkinghorne moves from apologetic argument to applying insights derived from physics to theology, his book loses none of its power and in fact becomes even more intellectually engaging."—The Boston Book Review