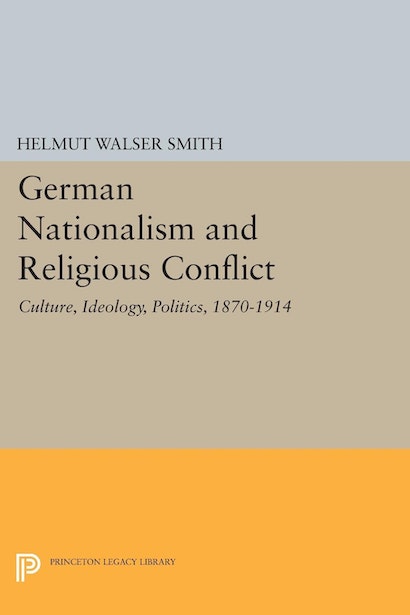 The German Empire of 1871, although unified politically, remained deeply divided along religious lines. In German Nationalism and Religious Conflict, Helmut Walser Smith offers the first social, cultural, and political history of this division. He argues that Protestants and Catholics lived in different worlds, separated by an “invisible boundary” of culture, defined as a community of meaning.

As these worlds came into contact, they also came into conflict. Smith explores the local as well as the national dimensions of this conflict, illuminating for the first time the history of the Protestant League as well as the dilemmas involved in Catholic integration into a national culture defined primarily by Protestantism.

The author places religious conflict within the wider context of nation-building and nationalism. The ongoing conflict, conditioned by a long history of mutual intolerance, was an integral part of the jagged and complex process by which Germany became a modern, secular, increasingly integrated nation. Consequently, religious conflict also influenced the construction of German national identity and the expression of German nationalism. Smith contends that in this religiously divided society, German nationalism did not simply smooth over tensions between two religious groups, but rather provided them with a new vocabulary for articulating their differences. Nationalism, therefore, served as much to divide as to unite German society.

"Smith describes a familiar narrative in a provocative and novel way. . . . Fruitfully using works in cultural studies, as well as the recent historiography of the politics of religion, Smith presents a finely textured account of Catholic-Protestant difference."—Choice

"Fluent, full of spark and verve, and very enjoyable to read. Historians and political scientists concerned with modern Europe generally, historians and sociologists of religion, those interested in nationalism and state formation—this book has something to offer them all."—David Blackburn, Harvard University