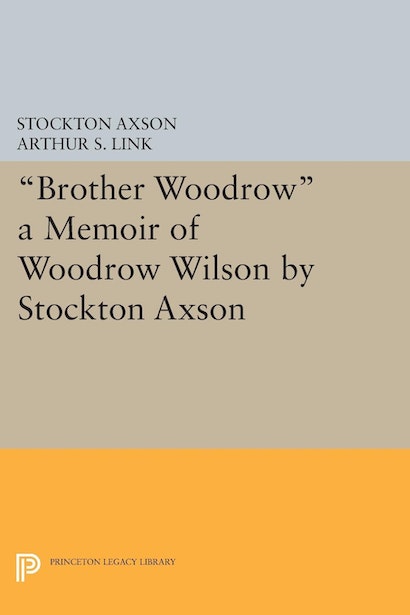 This memoir of Woodrow Wilson is a long-neglected treasure, full of the candid and perceptive observations of Wilson’s brother-in-law and close friend, Stockton Axson. A charming and talented scholar of English literature, Axson became one of the few people in whom the reticent Wilson confided freely. Axson and Wilson met in 1884, when Wilson was courting Axson’s sister Ellen, while Axson was still a school boy. The friendship of the two men ended only with the president’s death in 1924. Axson’s fondness for his mentor, “Brother Woodrow,” pervades this account, but he is frank in his analysis of Wilson’s flaws. As one of only a few personal memoirs of Wilson, this book offers a uniquely intimate view of the “human side” of the introverted president — and a sensitive evocation of the social life of a bygone era.

Axson begins with memories of Wilson’s father and of Wilson’s life as a young man, including his engagement and marriage to Ellen Axson and his early teaching posts. Wilson taught for twelve years at Princeton University before his accession to its presidency, and Axson also taught there during this period. After Wilson began his stormy career as president of Princeton, Axson’s bachelor quarters were often a meeting place for the “Wilson faction.” His lucid analysis of Wilson’s successes and failures as Princeton’s president is one of the highlights of the book — and probably the best record of these years of Wilson’s life.

The book ends with a look behind the scenes of Wilson’s career as governor of New Jersey and president of the United States, and an analysis of the growing complexity of his personality. “It is Uncle Joseph [Wilson’s father] in him,” observed one relative of Wilson’s seeming rigidity. From the standpoint of a loving family member, Axson offers a penetrating but sympathetic report on how Wilson changed as he bore the terrible burdens of World War I and its aftermath.