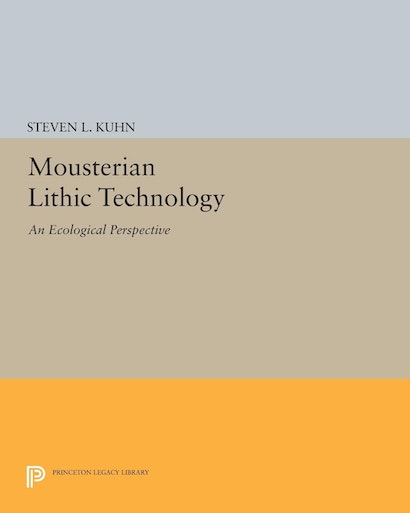 Human beings depend more on technology than any other animal — the use of tools and weapons is vital to the survival of our species. What processes of biocultural evolution led to this unique dependence? Steven Kuhn turns to the Middle Paleolithic (Mousterian) and to artifacts associated with Neanderthals, the most recent human predecessors. His study examines the ecological, economic, and strategic factors that shaped the behavior of Mousterian tool makers, revealing how these hominids brought technological knowledge to bear on the basic problems of survival.

Kuhn’s main database consists of assemblages of stone artifacts from four caves and a series of open-air localities situated on the western coast of the Italian peninsula. Variations in the ways stone tools were produced, maintained, and discarded demonstrate how Mousterian hominids coped with the problems of keeping mobile groups supplied with the artifacts and raw materials they used on a daily basis. Changes through time in lithic technology were closely tied to shifting strategies for hunting and collecting food. Some of the most provocative findings of this study stem from observations about the behavioral flexibility of Mousterian populations and the role of planning in foraging and technology.

"Steven Kuhn demonstrates that models and data of hunter-gatherer behavior are necessarily linked.... I looked forward to the opportunity to read this book and I was not disappointed. It largely extends and elaborates, rather than duplicates, Kuhn's previous writings on these subjects and data. Kuhn demonstrates great skill at moving back and forth between data and theory and also between the literature of both New World hunter-gatherer studies and Old World Paleolithic research. It is these combinations that make Mousterian Lithic Technology succeed."—Journal of Anthropological Research

"This book is significant partly because it relies on little-known and original Middle Paleolithic assemblages, but mostly because it addresses a very important, yet unexplored, aspect of prehistoric tool production. Steven Kuhn develops a model and methodology that undoubtedly constitute an important breakthrough and that may well yield interesting results in other geographical or chronological domains."—Catherine Perlès