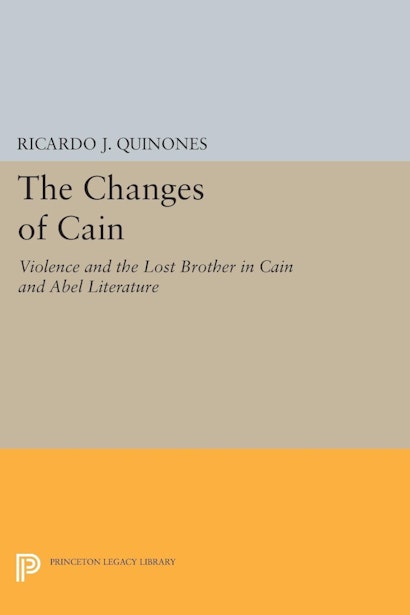 Era by era, from the writings of the classical Christian epoch up to East of Eden and Amadeus, from Philo to Finnegans Wake, Ricardo Quinones examines the contexts of a master metaphor of our culture. This brilliant work is the first comprehensive book on the Cain and Abel story.

“Ricardo Quinones takes us on a grand tour of Western civilization in his admirable book, which reveals the riches of the Cain-Abel story as it develops from its Biblical origin to Citizen Kane and Michel Tournier. This is cultural history and literary criticism of the first order, finely written, formidably but gracefully erudite, and illustrating the capacity of Judeo-Christian culture and the modernity emerging from it constantly to criticize the darker side of its own foundations and realizations.” — Joseph Frank

“Ricardo J. Quinones skips Biblical and Talmudic exegesis to follow Cain and Abel through later centuries, from classical times to the present. What he uncovers sheds light on important shifts of consciousness and behavior in European and American culture… . Quinones writes with true eloquence and conviction… .” — James Finn Cotter, The Hudson Review

“Quinones’s study of how [the] three Cains were transformed by Romanticism and Modernism into a sometimes positive, sometimes negative, but always necessary archetype of the modern world is literary and cultural analytic history at its very best.” — Choice

Ricardo J. Quinones is Josephine Olp Weeks Professor of English and Comparative Literatures, and Director of the Gould Center for Humanistic Studies, at Claremont McKenna College in Claremont, California. He is the author of The Renaissance Discovery of Time (Harvard), Dante Alighieri (Twayne), and Mapping Literary Modernism: Time and Development (Princeton).

"Quinones is helpful on every aspect and variant reading of the story. He carries his learning gracefully."—New York Review of Books