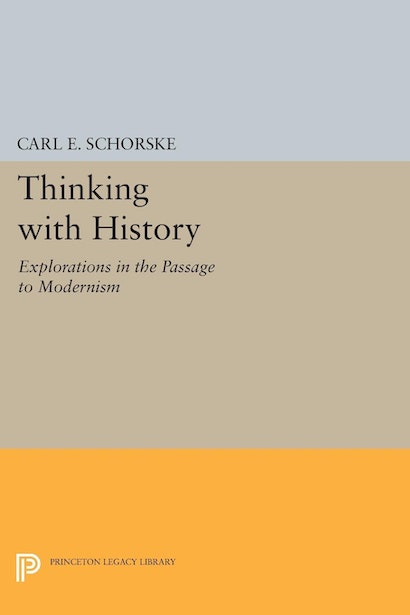 In this book, the distinguished historian Carl Schorske — author of the Pulitzer Prize-winning Fin-de-Siécle Vienna — draws together a series of essays that reveal the changing place of history in nineteenth-and twentieth-century cultures. In most intellectual and artistic fields, Schorske argues, twentieth-century Europeans and Americans have come to do their thinking without history. Modern art, modern architecture, modern music, modern science — all have defined themselves not as emerging from or even reacting against the past, but as detached from it in a new, autonomous cultural space. This is in stark contrast to the historicism of the nineteenth century, he argues, when ideas about the past pervaded most fields of thought from philosophy and politics to art, music, and literature. However, Schorske also shows that the nineteenth century’s attachment to thinking with history and the modernist way of thinking without history are more than just antitheses. They are different ways of trying to address the problems of modernity, to give shape and meaning to European civilization in the era of industrial capitalism and mass politics.

Schorske begins by reflecting on his own vocation as it was shaped by the historical changes he has seen sweep across political and academic culture. Then he offers a European sampler of ways in which nineteenth-century European intellectuals used conceptions of the past to address the problems of their day: the city as community and artifact; the function of art; social dislocation. Narrowing his focus to Fin-de-Siécle Vienna in a second group of essays, he analyzes the emergence of ahistorical modernism in that city. Against the background of Austria’s persistent, conflicting Baroque and Enlightenment traditions, Schorske examines three Viennese pioneers of modernism — Adolf Loos, Gustav Mahler, and Sigmund Freud — as they sought new orientation in their fields.

In a concluding essay, Schorske turns his attention to thinking about history. In the context of a postmodern culture, when other disciplines that had once abandoned history are discovering new uses for it, he reflects on the nature and limits of history for the study of culture.

"Schorske knows a great deal about Vienna, and the essays ... are original and penetrating, particularly those on Mahler and Freud."—Gordon Craig, New York Review of Books

"Carl Schorske is ... a master; anyone acquainted with his classic Fin-de-Siècle Vienna will know that fact, and accordingly will relish the prospect of these ... essays. Together they are a brilliant feat of learning, gracefully served."—A. C. Grayling, Financial Times

"This new collection shows why Schorske, the eminent intellectual historian . . . is a master craftsman. . . . [W]e are fortunate to have Schorske as a guide. . . . By his amazingly erudite and finely chiseled portraits of the potentialities of nineteenth-century culture, he has prepared the way for us to assess how we think with history in our own day."—Jonathan Elukin, The American Scholar

"Schorske is a very gifted writer and scholar, usually clearly and succinctly distilling his study of a great deal of material from many disciplines, avoiding historical and intellectual minutiae, and incorporating colorful anecdotes and quotes. . . . A pleasurable and stimulating read."—Kirkus Reviews

"What has interested Schorske and will fascinate readers is the interaction between history and the supposedly rootless modernism. . . . These [essays]. . . show the astonishing breadth of Schorske's knowledge."—Publisher's Weekly

"[A] reflective and provocative book."—Alethea Hayter, The Spectator