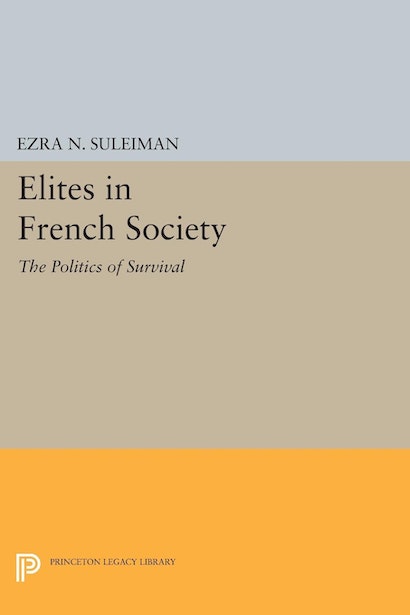 Why do some elites survive while others do not? How do certain institutions manage to preserve their importance in the face of crises, instability, and change? How does a democratic society legitimize elitist institutions? Combining the use of important social theories—particularly those of Mosca, Schumpeter, Tocqueville, and Pareto—with empirical analysis, Ezra Suleiman tries to answer these questions in his examination of the dominance and stability of France’s governing elites.

The author draws on original survey data, historical evidence, and specialized documentary sources. His three part discussion deals, first, with the state institutions that nurture the French elite; second, with the organization, legitimization, and adaptation of the elite and its institutions; and third, with some of the policy and political implications of France’s elitist system. In the final section of his book, he closely examines the relationship between elites in the public and private sectors.

In his investigation of France’s “state-created” elites, Professor Suleiman shows the great importance of the grandes écoles in training and promoting the elites, and the grand corps in providing a base from which the elites launch themselves into extra-governmental careers. He also finds that the elites’ capacity to adapt to an evolving social, political, and economic environment is a major factor in their ability to survive.