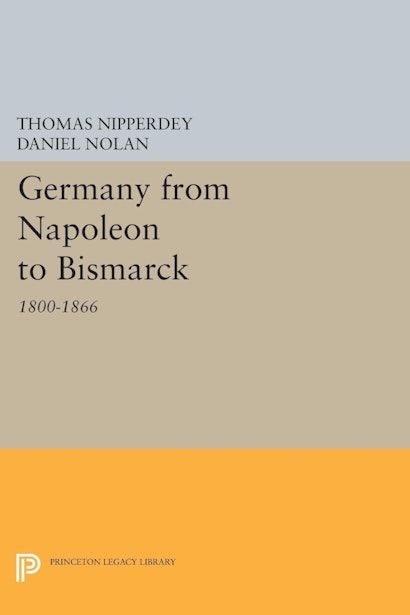 Thomas Nipperdey offers readers insights into the history and the culture of German nationalism, bringing to light much-needed information on the immediate prenational period of transition. A subject of passionate debates, the beginnings of German nationalism here receive a thorough-going exploration, from the dissolution of the Holy Roman Empire to Bismarck’s division of the German-speaking world into three parts: an enlarged Prussian state north of the Main, an isolated Austria-Hungary in the south, and a group of Catholic states in between. This altering of power structures, Nipperdey maintains, was the crucial action on which the future of the German state hinged. He traces the failure of German liberalism amidst the rise of nationalism, turning it from a story of inevitable catastrophe toward a series of episodes filled with contingency and choice.

The book opens with the seismic effect of Napoleon on the German ancien-régime. Napoleon’s modernizing hegemony is shown to have led to the gradual emergence of a civil society based on the liberal bourgeoisie. Nipperdey examines the fate of this society from the revolutions of 1848-49 through the rise of Bismarck. Into this story he weaves insights concerning family life, working conditions, agriculture, industrialization, and demography as well as religion, learning, and the arts.

"Nipperdey has produced a history of German unification for the 1980s and 1990s and, one suspects, beyond.... Essential reading."—The Times Literary Supplement