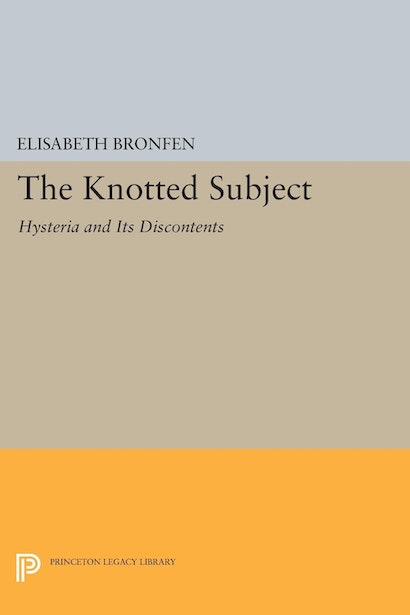 Surrealist writer André Breton praised hysteria for being the greatest poetic discovery of the nineteenth century, but many physicians have since viewed it as the “wastebasket of medicine,” a psychosomatic state that defies attempts at definition and cure and that can be easily mistaken for other pathological conditions. In light of a resurgence of critical interest in hysteria, leading feminist scholar Elisabeth Bronfen reinvestigates medical writings and cultural performance to reveal the continued relevance of a disorder widely thought to be a romantic formulation of the past. Through a critical rereading, she develops a new concept of hysteria, one that challenges traditional gender-based theories linking it to dissatisfied feminine sexual desire. Bronfen turns instead to hysteria’s traumatic causes, particularly the fear of violation, and shows how the conversion of psychic anguish into somatic symptoms can be interpreted today as the enactment of personal and cultural discontent.

Tracing the development of cultural formations of hysteria from the 1800s to the present, this book explores the writings of Freud, Charcot, and Janet together with fictional texts (Radcliffe, Stoker, Anne Sexton), opera (Mozart, Wagner), cinema (Cronenberg, Hitchcock, Woody Allen), and visual art (Marie-Ange Guilleminot, Cindy Sherman). Each of these creative works attests to a particular relationship between hysteria and self-fashioning, and enables us to read hysteria quite literally as a language of discontent. The message broadcasted by the hysteric is one of vulnerability: vulnerability of the symbolic, of identity, and of the human body itself.

Throughout this work, Bronfen not only offers fresh approaches to understanding hysteria in our culture, but also introduces a new metaphor to serve as a theoretical tool. Whereas the phallus has long dominated psychoanalytical discourse, the image of the navel — a knotted originary wound common to both genders — facilitates discussion of topics relevant to hysteria, such as trauma, mortality, and infinity. Bronfen’s insights make for a lively, innovative work sure to interest readers across the fields of art and literature, feminism, and psychology.

"A brilliant volume…. [Bronfen's] readings are always surprising and are based on a comprehensive knowledge of the historical evolution of the meaning of hysteria."—Sander L. Gilman, University of Chicago