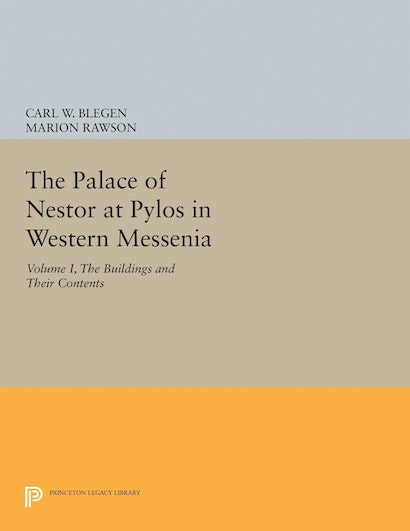 Homer’s King Nestor of “sandy Pylas” passes from legend into history in this first volume of the report of excavations on a hill called Englianos in Messenia, conducted by the Archaeological Expedition of the University of Cincinnati. The palace with its contents and the surrounding lower town indicate that this was an administrative center and the capital of a prosperous Mycenaean kingdom. The name Pylos appears on more than fifty tablets, and there can be no doubt that this was the Messenian abode of the Nestor of Greek tradition. Destroyed by fire at the end of the 13th century B.C., and never reoccupied, the palace has lain for more than 3,000 years in ruins. During the annual campaigns of the Expedition between 1952 and 1964, it emerged as a complex of four separate structures of considerable size. The floors, stumps of wall bearing plaster with painted decorations, doorways, and other evidence helped to identify gateways, courts, porticoes, vestibules, corridors, a great throne room, storerooms, a wine magazine, pantries filled with pottery, a bathroom, stairways, and a repair shop. Except for the tablets, seals, and frescoes, which will be described in other volumes, all the finds are recorded and illustrated with plans, drawings, and photographs.