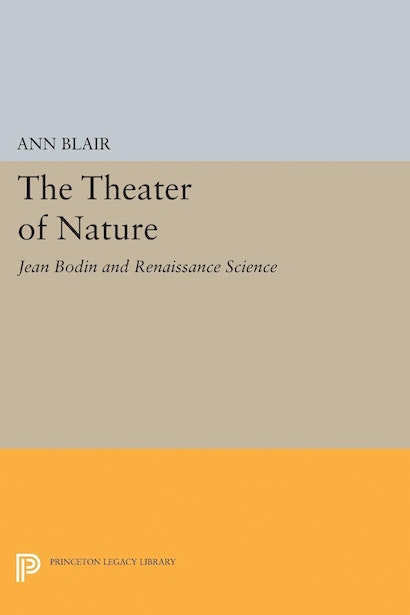 The Theater of Nature is histoire totale of the last work of the political philosopher Jean Bodin, his Universae naturae theatrum (1596). Through Bodin’s work, Ann Blair explores the fascinating and previously little known world of late Renaissance natural philosophy. A study of the text, of its context (through comparisons with different genres of natural philosophy and works entitled “Theater”), and of its reception in the seventeenth century highlights above all the religious motivations, encyclopedic ambitions, and bookish methods characterizing much of late Renaissance science. Amid the religious crisis and the explosion of knowledge in the late sixteenth century, natural philosophy offered grounds for consensus across religious divides and a vast collection of useful and pleasant information, admired for both its order and its variety. The commonplace book provided a versatile tool for gathering and sorting bits of natural knowledge garnered from a wide array of bookish sources and “experience,” fueling a vigorous cycle of text-based science at least through the mid-seventeenth century. The miscellaneous genre of the problemata into which Bodin’s text was adapted attracted more popular audiences until even later. To place the Theatrum in its cultural context is also to reveal more clearly the peculiarities of Bodin’s philosophical project in this, its final expression. He combined arguments from reason, experience, and authority to undermine traditional Aristotelian conclusions and proposed instead a natural philosophy based on pious, often biblical, solutions.

"Jean Bodin (1529/30-1596) is an enigmatic, prolific writer of works in both Latin and in French. His Universae naturae theatrum [on early modern science] while influential in the seventeenth century, is rarely read today. . . . [Ann Blair corrects this in her] in-depth study of methods, modes of argument, metaphorical imagery, philosophy, theology, science, and reader response to Bodin's 633-page Latin work on natural philosophy. Hers is an exemplary model of a thorough and masterful, multi-faceted history of one book."—Seventeenth-Century News