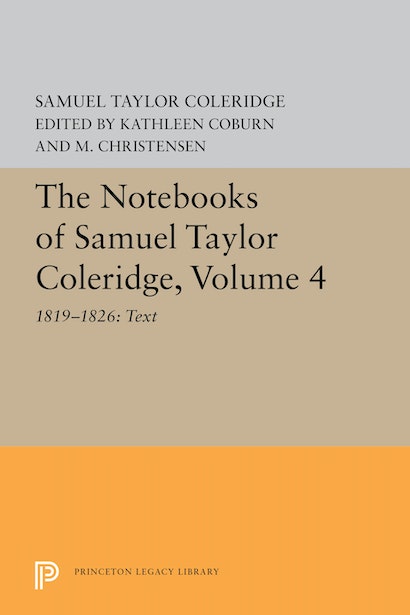 During his adult life until his death in 1834, Coleridge made entries in more than sixty notebooks. Neither commonplace books nor diaries, but something of both, they contain notes on literary, theological, philosophical, scientific, social, and psychological matters, plans for and fragments of works, and many other items of great interest. This fourth double volume of the Notebooks covers the years 1819 through 1826. The range of Coleridge’s reading, his endless questioning, and his recondite sources continue to fascinate the readers. Included here are drafts and full versions of the later poems. Many passages reflect the technological interests that led to Coleridge’s writing of Aids of Reflection, later to become an important source for the Transcendentalists.
Another development in this volume is the startling expansion of Coleridge’s interest in “the theory of life” and in chemistry — the laboratory chemistry of the Royal Institution of Great Britain and the theoretical chemistry of German transcendentalists such as Okea, Steffens, and Oersted. Also contained in this volume is an important section on the meaning of marriage.
Kathleen Coburn is Professor Emeritus at Victoria College of the University of Toronto. Merton Christensen was Professor of English at the University of Delaware.
Bollingen Series L:4.