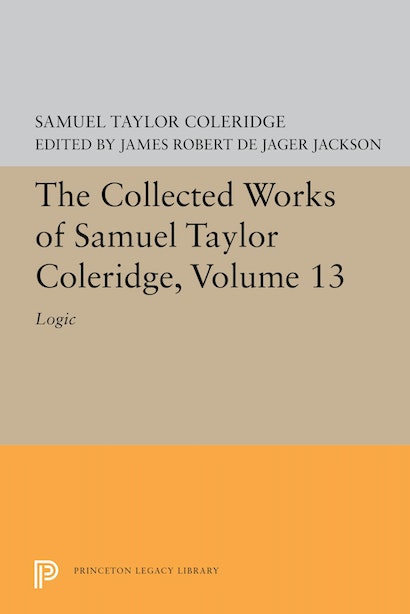 The manuscript of Coleridge’s Logic is published here in its entirety for the first time, along with the texts of manuscripts that are directly related to it.
Coleridge’s plans to write about logic go back at least as far as 1803, but it was not until the 1820s that he undertook to write a book that would be of practical use to young men about to enter “the bar, the pulpit, and the senate.” By that time the philosophy course he taught to classes of such young men had given them access to his thoughts, and he in turn benefited from their interest and enthusiasm. Coleridge wished to encourage his readers to think for themselves in a manner that was consistent and self-aware. He hoped to provide them with a system of logic “applied to the purposes of real life.”
His Logic differs from earlier English models in its emphasis on the psychology of thought and in its sceptical treatment fo the figures of the syllogism. Here the influence of Kant’s Critique of Pure Reason predominates. The Logic is also concerned with the psychology of language — indeed Coleridge thought of calling the book “The Elements of Discourse” — and with the philosophical and theological implications of different semantic theories. Here he was sustained by a vigorous English tradition and aided by his own subtle experience of the relationship between thoughts and words.
The Logic is an introduction to thinking about thought. It touches on a variety of topics — education, the origin of language, the importance of defining terms, subjective and objective truth, the meaning of abstraction, understadning and reason, conception and perception, self-consciousness, intuition, space and time, cause and effect, mathematical evidence, and the mind’s emancipation from the senses — and behind these characteristic concerns Coleridge’s more comprehensive views may be freshly glimpsed.
J.R. de J. Jackson is Professor of English at the University of Toronto. He is the author of Method and Imagination in Coleridge’s Criticism and the editor of Coleridge: The Critical Heritage (both published by Routledge & Kegan Paul).
Bollingen Series LXXV