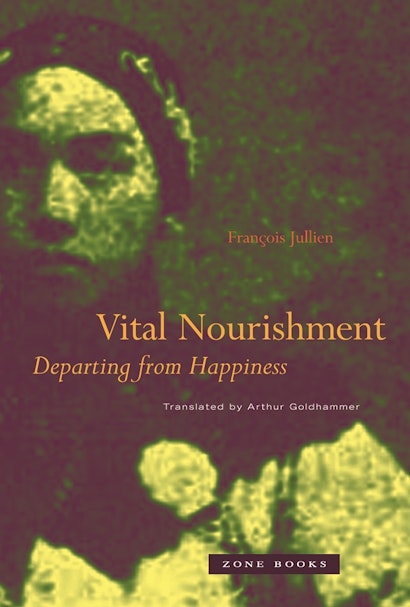 The philosophical tradition in the West has always subjected life to conceptual divisions and questions about meaning. Although this process has given rise to a rich history of inquiry, it proceeds too fast, contends François Jullien. In its anxiety about meaning, Western thinkers since Plato have forgotten simply to experience life.

In Vital Nourishment, Jullien slows down and begins to think about life from a point outside of Western inquiry, using the third- and fourth-century BCE Chinese thinker Zhuanghi as a foil in this installment of his continuing project of plumbing the philosophical divide between Eastern and Western thought.

The question of how to “feed life,” or nourish it, is the point of departure for the Chinese tradition that Jullien locates in Zhuanghi. Life is something that passes through each of us, and we have a duty to become amenable to its ebbs and flows. We must cultivate a sense of being adequate to it so that we can house it.

Exploring notions of breath, energy, and immanence, Jullien reopens a vibrant space of intellectual exchange between East and West. In doing so, he refuses to commit to a rigid thesis of meaning, and his text unfolds as an elegant process that begins to mirror the very type of thought he explores.

While his inquiry is certainly weighted toward reinvigorating Western thought with ideas from the East, Jullien points out that this approach is intellectually and politically imperative at present. Against the self-help industry, which pursues an opportunistic simulacrum of this type of intellectual exchange, Jullien seeks to create a space of mutual inquiry that maintains the integrity of both Eastern and Western thinking. Vital Nourishment is therefore both a rich intellectual historical journey and a text very much attuned to the philosophical politics of the present.

"A significant and indispensable addition to Chinese body politics."—Dao: A Journal of Comparative Philosophy