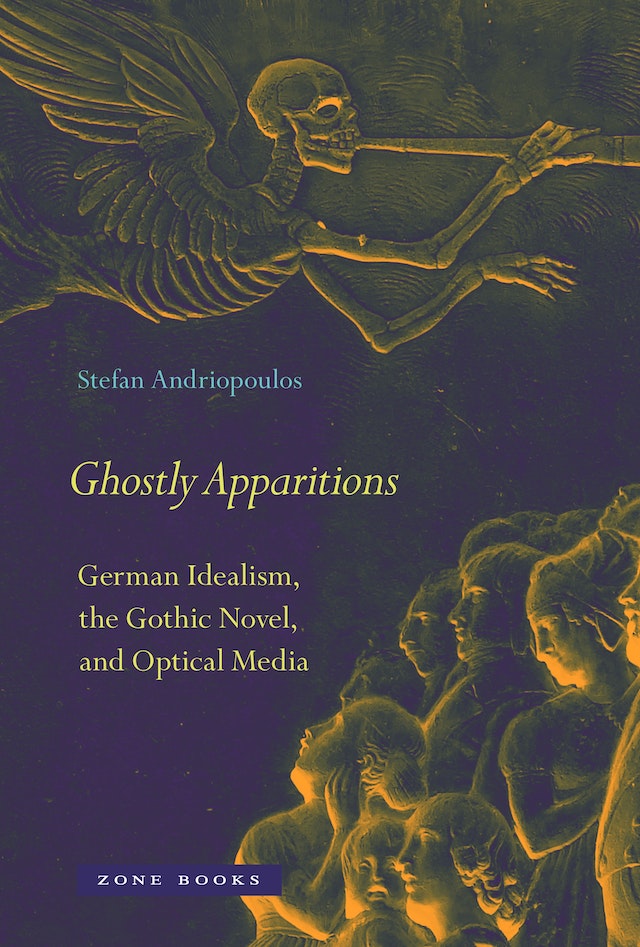 Drawing together literature, media, and philosophy, Ghostly Apparitions provides a new model for media archaeology and its transformation of intellectual and literary history. Stefan Andriopoulos examines new media technologies and distinct cultural realms, tracing connections between Kant’s philosophy and the magic lantern’s phantasmagoria, the Gothic novel and print culture, and spiritualist research and the invention of television.

As Kant was writing about the possibility of spiritual apparitions, the emerging medium of the phantasmagoria used hidden magic lanterns to startle audiences with ghostly projections. Andriopoulos juxtaposes the philosophical arguments of German idealism with contemporaneous occultism and ghost shows. In close readings of Kant, Hegel, and Schopenhauer, he traces the diverging modes in which these authors appropriated figures of optical media and spiritualist notions.

The spectral apparitions from this period also intersect with the rise of popular print culture. Andriopoulos explores the circulation of ostensibly authentic ghost narratives and the Gothic novel, which was said to produce “reading addiction” and a loss of reality. Romantic representations of animal magnetism and clairvoyance similarly blurred the boundary between fiction and reality.

The final chapter of Ghostly Apparitions extends this archaeology of new media into the early twentieth century. Tracing a reciprocal inter_action between occultism and engineering, Andriopoulos uncovers how theories and devices of psychical research enabled the emergence of television.

“Probing at the roots of modern thought and modern media with both scholarly rigor and originality, Andriopoulos uncovers the phantas­magoria of images that haunt the formation of the modern imagination. The ghostly reveals itself as less the realm of ancient superstition and folklore than the seedbed of a new intellectual, artistic, and techno­logical world in which the visible and the material can diverge, and the power of ideas and visual media seem to mime the uncanny effects of apparitions. This is an exciting, and occasionally startling, work of cultural history.”— Tom Gunning, Edwin A. and Betty L. Bergman Distinguished Service Professor, University of Chicago

“Focusing on intersections of new media technologies, philosophy, and literature, this book throws an entirely new and utterly fascinating light on the emergence of German idealism. Lucidly and forcefully argued, it provides us with a media archeology that connects the cultural background of Kant’s, Hegel’s, and Schopenhauer’s thought with discussions of optical instruments and occultism as well as with Romanticism and the Gothic novel. Andriopoulos thereby changes the way in which we read the eighteenth and nineteenth centuries, producing an intricate picture of material practices, new media, philosophical theory, and poetic styles.”— Niklaus Largier, Sidney and Margaret Ancker Chair in the Humanities, Professor of German and Comparative Literature, University of California, Berkeley