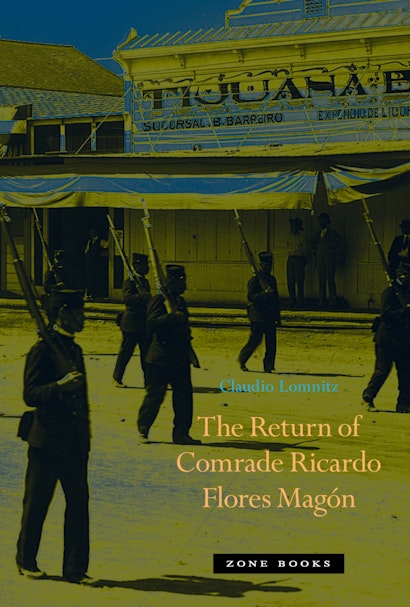 In this long-awaited study, Claudio Lomnitz tells an unprecedented story about the experience and ideology of American and Mexican revolutionary collaborators of the Mexican anarchist Ricardo Flores Magón. Based on extensive research in American and Mexican archives, Lomnitz explores the rich, complicated, and virtually unknown lives of Magón and his comrades devoted to the “Mexican Cause.”

This anthropological history of anarchy, cooperation, and betrayal seeks to capture the experience and meaning of these dedicated militants who themselves struggled to understand their role and place at the margins of the Mexican Revolution. For them, the revolution was untranslatable, a pure but deaf subversion: “La revolución es la revolución.” For Lomnitz, their experiences reveal the meaning of this phrase.

The Return of Comrade Ricardo Flores Magón tracks the lives of John Kenneth Turner, Ethel Duffy, Elizabeth Trowbridge, Ricardo Flores Magón, and Lázaro Gutiérrez de Lara, among others, to illuminate the reciprocal relationship between personal and collective ideology and action. This book is an epic and tragic tale, never before told, about camaraderie and disillusionment in the first transnational grassroots political movement to span the US–Mexico border. This book will revise how we think about not only the Mexican Revolution but also revolutionary action and passion.

"The brothers Magón had quite a story. Claudio Lomnitz, a historian-anthropologist and one of Mexico’s preeminent public intellectuals, tells it beautifully and compellingly in minute detail."—American Historical Review

"We have had many biographies of Ricardo Flores Magón and the Mexican Liberal Party … but Lomnitz’s The Return of Comrade Ricardo Flores Magón, a collective biography based on new archival research on both sides of the border as well as on previously unknown or untapped sources, and written as a cultural history of this milieu and period, represents the fullest and richest account so far."—New Politics

“The Return of Comrade Ricardo Flores Magón needs to be read and enjoyed. Its story is exciting and its execution is exhilarating: as history, as psychological analysis and sociology, and as a historian’s personal commitment.” — Jorge Aguilar Mora, author of Una muerte sencilla, justa, eterna: Cultura y guerra durante la Revolución Mexicana

“Lomnitz’s magnificent story of the Mexican Revolution — told in a Deleuzian ‘minor’ key around the borderland revolutionary figure of Ricardo Flores Magón and the circles he moved through — is at once a brilliant reconstruction of this particular piece of twentieth-century transnational history and a poetic interrogation of the pathos inherent in the very conception and practice of revolutionary politics. An outstanding and memorable achievement.”— Dipesh Chakrabarty, author of Provincializing Europe: Postcolonial Thought and Historical Difference

“Lomnitz unearths completely unknown archival sources and offers a fresh look at late nineteenth-century and early twentieth-century Mexican history. The Return of Comrade Ricardo Flores Magón challenges canonical histories of the Mexican Revolution by offering a new, transnational and comparative model to comprehend the origins of twenty-first-century Mexico.”— Rubén Gallo, author of Freud’s Mexico: Into the Wilds of Psychoanalysis

“The Return of Comrade Ricardo Flores Magón is a magisterial work, at once epic yet intimate; erudite yet lyrical; dispassionate yet deeply personal. In revisiting the seemingly minor story of Magón and his transnational revolutionary network, Lomnitz offers a profound meditation on the very nature of revolution itself, and on its role in modern history making. His deft probing of the tensions that spur this story — between ideology and accommodation, exile and return, personalismo and the ‘cult of the state’ — allows us to glimpse a ‘third alternative’ that is strikingly relevant to our own time: one that rejects predatory nationalism in favor of collectivism, mutual aid, welfare, enjoyment.”— Jean Comaroff, author of Body of Power, Spirit of Resistance: The Culture and History of a South African People