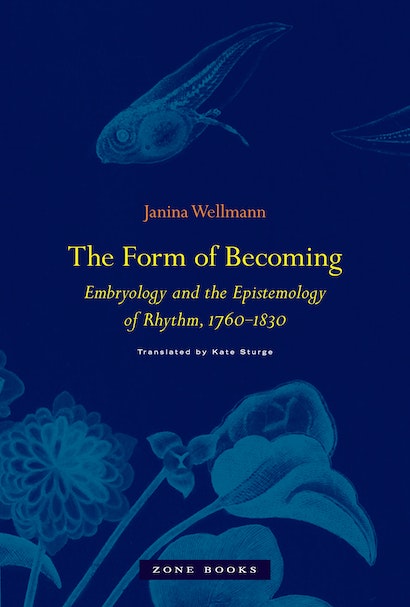 The Form of Becoming offers an innovative understanding of the emergence around 1800 of the science of embryology and a new notion of development, one based on the epistemology of rhythm. It argues that between 1760 and 1830, the concept of rhythm became crucial to many fields of knowledge, including the study of life and living processes.

The book juxtaposes the history of rhythm in music theory, literary theory, and philosophy with the concurrent turn in biology to understanding the living world in terms of rhythmic patterns, rhythmic movement, and rhythmic representations. Common to all these fields was their view of rhythm as a means of organizing time — and of ordering the development of organisms.

Janina Wellmann, a historian of science, has written the first systematic study of visualization in embryology. Embryological development circa 1800 was imagined through the pictorial technique of the series, still prevalent in the field today. Tracing the origins of the developmental series back to seventeenth-century instructional graphics for military maneuvers, dance, and craft work, The Form of Becoming reveals the constitutive role of rhythm and movement in the visualization of developing life.

"To understand the richness that once attended the discipline of aesthetics we need to go back in time, and there we find it not only in discussions about art and poetry, but also rigorously interrogated as a philosophy of science, and even military practice. Janina Wellmann’s The Form of Becoming provides a detailed account of a period when the role of aesthetics was still seen as a main stage for a universal philosophy."—Catherine Despont, BOMB

"Historian of science Janina Wellmann ha[s]… demonstrated the rich potential of thinking about rhythm in terms of an episteme that structures knowledge across different disciplines, and also provides a history for this kind of thinking. The Form of Becoming presents an admirable and highly ambitious tour-de-force through philosophy, literature, music theory, instructional iconography and, of course, early embryology."—Irmtraud Huber, The British Society for Literature and Science

“This beautifully written book is full of movement and insight. A daring and exquisite analysis of rhythm as episteme, it opens up new historical and philosophical fronts for accounts of time and change in art and science.”— Hannah Landecker, author of Culturing Life: How Cells Became Technologies

“In a work of striking originality, historian Janina Wellmann rethinks the meaning of development circa 1800 in terms of rhythm. Casting her net wide, she draws on the aesthetics of verse and music, the sciences of botany and embryology, and the practices of fencing and dance to show how a new kind of natural law and a new kind of visualization in series captured the patterned flow of development of life forms, morphology in motion.” — Lorraine Daston, author of Objectivity (cowritten with Peter Galison)

“The Form of Becoming belongs somewhere on the bookshelf between Richards’ The Romantic Conception of Life and Nyhart’s Biology Takes Form. . . . In addition to providing new perspectives on the perception of time in embryonic development and in Enlightenment science, this fascinating volume should facilitate lively interdisciplinary seminars.”— Scott Gilbert, author of Developmental Biology

“In this remarkable volume, Janina Wellmann demonstrates that attention to rhythm was the vital bond connecting science and culture in the eighteenth century. This is history of science inflected by philosophy and literary and cultural series: science studies at its most intrepid.”— Susan Merrill Squier, author of Liminal Lives: Rethinking Biomedicine at the Boundaries of the Human