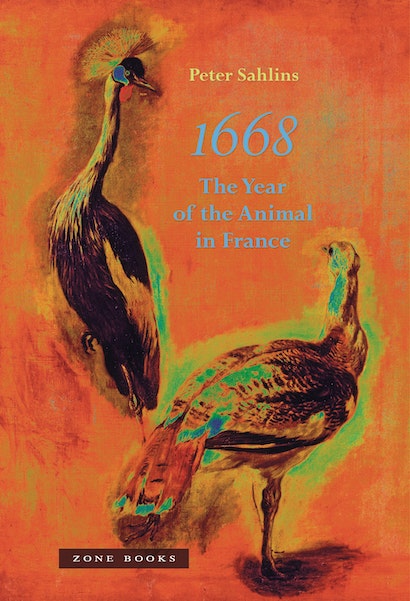 Peter Sahlins’s brilliant new book reveals the remarkable and understudied “animal moment” in and around 1668 in which authors (including La Fontaine, whose Fables appeared in that year), anatomists, painters, sculptors, and especially the young Louis XIV turned their attention to nonhuman beings.

At the center of the Year of the Animal was the Royal Menagerie in the gardens of Versailles, dominated by exotic and graceful birds. In the remarkable unfolding of his original and sophisticated argument, Sahlins shows how the animal bodies of the menagerie and others (such as the dogs and lambs of the first xenotransfusion experiments) were critical to a dramatic rethinking of governance, nature, and the human.

The animals of 1668 helped to shift an entire worldview in France — what Sahlins calls Renaissance humanimalism — toward more modern expressions of Classical naturalism and mechanism. In the wake of 1668 came the debasement of animals and the strengthening of human animality, including in Descartes’s animal-machine, highly contested during the Year of the Animal.

At the same time, Louis XIV and his intellectual servants used the animals of Versailles to develop and then to transform the symbolic language of French absolutism. Louis XIV came to adopt a model of sovereignty after 1668 where his absolute authority is represented in manifold ways with the bodies of animals and justified by the bestial nature of his human subjects.

1668: The Year of the Animal in France explores and reproduces the king’s animal collections — in printed text, weaving, poetry, and engraving, all seen from a unique interdisciplinary perspective. Sahlins brings the animals of 1668 together and to life as he observes them critically in their native habitats — within the animal palace itself by Louis Le Vau, the paintings and tapestries of Charles Le Brun, the garden installations of André Le Nôtre, the literary work of Charles Perrault and the natural history of his brother Claude, the poetry of Madeleine de Scudéry, the philosophy of René Descartes, the engravings of Sébastien Leclerc, the trans_fusion experiments of Jean Denis, and others.

The author joins the non_human and human agents of 1668 — panthers and painters, swans and scientists, weasels and weavers — in a learned and sophisticated treatment that will engage scholars and students of early modern France and Europe and readers broadly interested in the subject of animals in human history.

“Peter Sahlins has given us a spellbinding account — deeply and imaginatively researched — of the new and devalorizing attitudes toward animals that emerged in the early decades of Louis XIV’s reign, nourished by natural philosophy and Cartesian thought. Depicted by artists, sculptors, and poets, animals — whether peaceful or violent — were put to the service of royal absolutism and social hierarchy. 1668: The Year of the Animal tells a delicate and complex story, and brings us a compelling new perspective on the cultural and political history of early modern times.”— Natalie Zemon Davis, University of Toronto

“Peter Sahlins’s gorgeous new book brings a lost world back to life: that of the architects and virtuosi, artists, and courtiers who built and visited the menageries of Louis XIV. Sahlins shows us that they — like their king — found animals good to think with and even better to portray. In the shadow of Descartes’s new understanding of animal nature, the servants of absolutism used animals and transfused them, portrayed them as the inhabitants of a peaceable kingdom dominated by birds and then, as the character of Louis’s rule changed, as wild and frightening. The reader has a field day following this most perspicacious of guides as he explores menageries, reads texts, and interprets tapestries. Both philosophical and erudite history, Sahlins’s book is as entertaining as it is original.”— Anthony T. Grafton, Princeton University