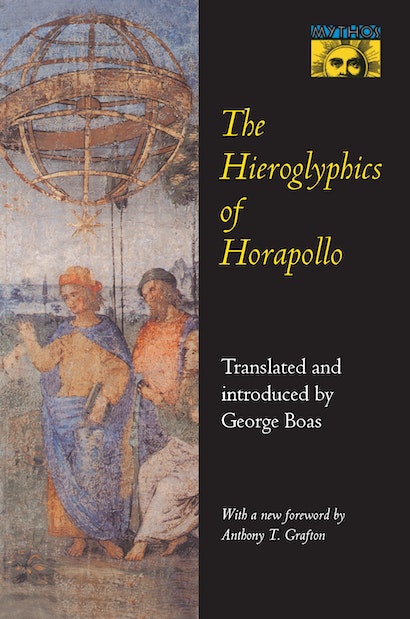 Written reputedly by an Egyptian magus, Horapollo Niliacus, in the fourth century C.E., The Hieroglyphics of Horapollo is an anthology of nearly two hundred “hieroglyphics,” or allegorical emblems, said to have been used by the Pharaonic scribes in describing natural and moral aspects of the world. Translated into Greek in 1505, it informed much of Western iconography from the sixteenth through the nineteenth centuries. This work not only tells how various types of natural phenomena, emotions, virtues, philosophical concepts, and human character-types were symbolized, but also explains why, for example, the universe is represented by a serpent swallowing its tail, filial affection by a stork, education by the heavens dropping dew, and a horoscopist by a person eating an hourglass.


In his introduction Boas explores the influence of The Hieroglyphics and the causes behind the rebirth of interest in symbolism in the sixteenth century. The illustrations to this edition were drawn by Albrecht Dürer on the verso pages of his copy of a Latin translation.

At the time of his death George Boas was Professor of History at the Johns Hopkins University.

"Lucid language [and] stimulating and provoking thinking . . . are among the merits of this small book that will certainly become an invaluable source for students interested in Renaissance symbolism."—George Mylonas