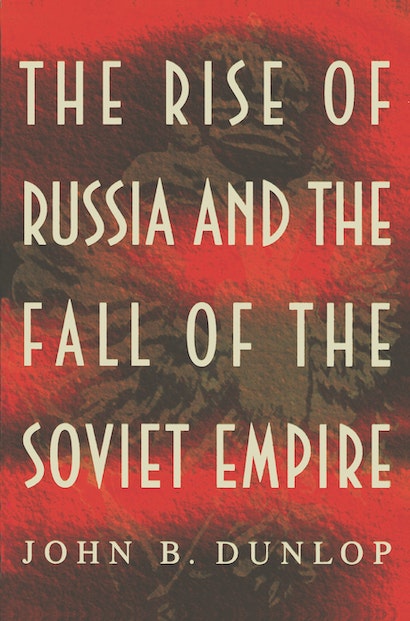 This is the first work to set one of the great bloodless revolutions of the twentieth century in its proper historical context. John Dunlop pays particular attention to Yeltsin’s role in opposing the covert resurgence of Communist interests in post-coup Russia, and faces the possibility that new institutions may not survive long enough to sink roots in a traditionally undemocratic culture.

John B. Dunlop is Senior Fellow at the Hoover Institution on War, Revolution and Peace, and the author of The Faces of Contemporary Russian Nationalism (Princeton), among other works.

"The first serious attempt to analyze the last six years of the Soviet Union from the perspective of that union's largest member, the Russian Federation. The task is formidable, but Dunlop undertakes it with style and clarity."—Peter Reddaway, The New York Review of Books

"Through a judicious mix of well-chosen detail and a good feel for the peculiarities of the Russian scene, Dunlop has produced a book equally valuable to someone trying to understand how Gorbachev's perestroika came a cropper and to someone who needs to know the immediate background of the Russia we now have."—Robert Legvold, Foreign Affairs

"There is no doubt that students of Russian politics will return often to this wellspring of original information and insights."—Charles King, The Times Higher Educational Supplement

"There are few better guides than Dunlop to the complexities of Russian national politics."—Slavonic Review

"John B. Dunlop's study of the collapse of the Soviet Union and the attendant revitalization of Russia is a comprehensive account of the recent events that transpired during this remarkable transformation of political power. . . . Using a plethora of available sources, including written accounts, archival documents, personal interviews, and firsthand observation, Dunlop delivers finely textured portraits of the leading political actors, groups, and organizations involved in this complex story. . . . an excellent book, well written and well researched."—James W. Lamare, Annals of the American Academy of Political and Social Science

"[Dunlop] has written what is undoubtedly one of the best books on the last years of the Soviet Union. . . . Every specialist on Russian politics or Soviet history should buy this thought-provoking volume."—Europe-Asia Studies

"This is an extremely dramatic story, which no one predicted, and which is of great importance for the undoubtedly very turbulent future developments in the successor states of the Soviet Union."—Peter Reddaway, George Washington University, and former Director of the Kennan Institute for Advanced Russian Studies, Woodrow Wilson International Center for Scholars

"Dunlop's book is a comprehensive and timely history of the remarkable transformation of the once mighty Soviet Empire. Dunlop is a superb stylist. His writing is lucid, his point of view clear, and his prose eminently readable."—Bruce D. Porter, Associate Director, Olin Institute for Strategic Studies, Harvard University