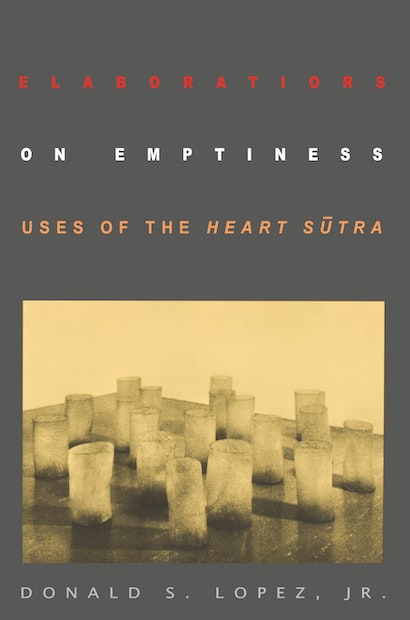 The Heart Sutra is perhaps the most famous Buddhist text, traditionally regarded as a potent expression of emptiness and of the Buddha’s perfect wisdom. This brief, seemingly simple work was the subject of more commentaries in Asia than any other sutra. In Elaborations on Emptiness, Donald Lopez explores for the first time the elaborate philosophical and ritual uses of the Heart Sutra in India, Tibet, and the West.


Included here are full translations of the eight extant Indian commentaries. Interspersed with the translations are six essays that examine the unusual roles the Heart Sutra has played: it has been used as a mantra, an exorcism text, a tantric meditation guide, and as the material for comparative philosophy. Taken together, the translations and essays that form Elaborations on Emptiness demonstrate why commentary is as central to modern scholarship on Buddhism as it was for ancient Buddhists. Lopez reveals unexpected points of instability and contradiction in the Heart Sutra, which, in the end, turns out to be the most malleable of texts, where the logic of commentary serves as a tool of both tradition and transgression.

"Elaborations on Emptiness is a superb achievement: It is by far the best and most complete treatment of the Heart Sūtra in any Western language."—Jay Garfield, Journal of Buddhist Ethics

"[This] is a superb achievement: It is by far the best and most complete treatment of the Heart Sutra in any Western language."—Journal of Buddhist Ethics

"This scholarly book makes a valuable contribution to the understanding of the content and role of a key text. It also shows how the text has given rise to different interpretations over the centuries. It is of value for scholars and practitioners of Buddhism alike."—Sue Hamilton, Kings College, London