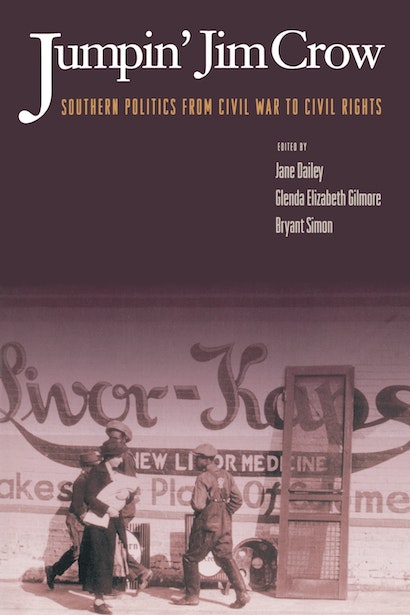 White supremacy shaped all aspects of post-Civil War southern life, yet its power was never complete or total. The form of segregation and subjection nicknamed Jim Crow constantly had to remake itself over time even as white southern politicians struggled to extend its grip. Here, some of the most innovative scholars of southern history question Jim Crow’s sway, evolution, and methods over the course of a century. These essays bring to life the southern men and women — some heroic and decent, others mean and sinister, most a mixture of both — who supported and challenged Jim Crow, showing that white supremacy always had to prove its power.


Jim Crow was always in motion, always adjusting to meet resistance and defiance by both African Americans and whites. Sometimes white supremacists responded with increased ferocity, sometimes with more subtle political and legal ploys. Jumpin’ Jim Crow presents a clear picture of this complex negotiation. For example, even as some black and white women launched the strongest attacks on the system, other white women nurtured myths glorifying white supremacy. Even as elite whites blamed racial violence on poor whites, they used Jim Crow to dominate poor whites as well as blacks. Most important, the book portrays change over time, suggesting that Strom Thurmond is not a simple reincarnation of Ben Tillman and that Rosa Parks was not the first black woman to say no to Jim Crow.


From a study of the segregation of household consumption to a fresh look at critical elections, from an examination of an unlikely antilynching campaign to an analysis of how miscegenation laws tried to sexualize black political power, these essays about specific southern times and places exemplify the latest trends in historical research. Its rich, accessible content makes Jumpin’ Jim Crow an ideal undergraduate reader on American history, while its methodological innovations will be emulated by scholars of political history generally. In addition to the editors, the contributors are Edward L. Ayers, Elsa Barkley Brown, W. Fitzhugh Brundage, Laura F. Edwards, Kari Frederickson, David F. Godshalk, Grace Elizabeth Hale, Jacquelyn Dowd Hall, Stephen Kantrowitz, Nancy MacLean, Nell Irwin Painter, and Timothy B. Tyson.

"In its linking of culture and social relations with politics, Jumpin' Jim Crow is cutting edge history and belongs in every academic library."—Library Journal

"Jumpin Jim Crow offers a valuable contribution to the study of race relations in the American South."—Junius P. Rodriguez, History

"This is a very important book. It might easily have been subtitled A Treatise on the New Southern Political History. The essays in it are important ones, and they hold together very well."—Glen Feldman, The Virginia Magazine

"In short, this collection is a revision of how historians think about the postbellum South. . . . It is an important and provocative book."—Clarence E. Walker, The Journal of Southern History

"A central contribution to these essays . . . is to our understanding of how the conflation of notions of manhood, paternalism, and white supremacy blurred and bridged the distinction between the public and private spheres in Southern life and politics."—Robert P. Green Jr., The Historian

"This volume is especially pertinent because so many historians over the last decade have de-emphasized the importance of race in the South. . . . These essays argue that the central dance of southern history was the efforts of whites to dominate African Americans. Expanding the definition of the political to include the front porch, these essays bridge 'the distance between public and private contests for power and dignity.' Focusing on the role of African Americans, dissident whites, and especially black and white women, these essays help explain how the most progressive of reform movements, the Civil Rights Movement, came out of what has been viewed by too many for too long as the 'backward' South."—Vernon Burton, author of In My Father's House Are Many Mansions and A Gentleman and an Officer

"This important book offers a pathbreaking approach to the study of southern politics and culture. Finding the political in 'unlikely spaces,' these essays require us to rethink the foundations of white supremacy and of southern history more generally."—Drew Gilpin Faust, Annenberg Professor of History, University of Pennsylvania