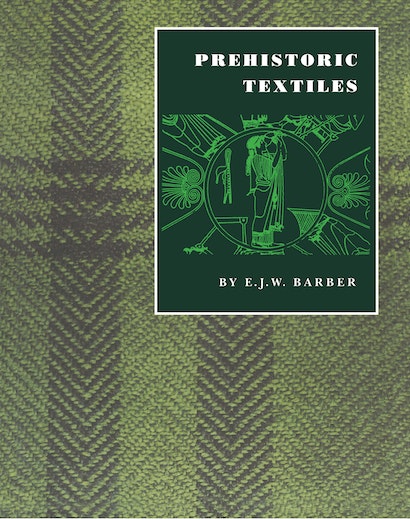 This pioneering work revises our notions of the origins and early development of textiles in Europe and the Near East. Using innovative linguistic techniques, along with methods from palaeobiology and other fields, it shows that spinning and pattern weaving began far earlier than has been supposed.

Prehistoric Textiles made an unsurpassed leap in the social and cultural understanding of textiles in humankind’s early history. Cloth making was an industry that consumed more time and effort, and was more culturally significant to prehistoric cultures, than anyone assumed before the book’s publication. The textile industry is in fact older than pottery — and perhaps even older than agriculture and stockbreeding. It probably consumed far more hours of labor per year, in temperate climates, than did pottery and food production put together. And this work was done primarily by women. Up until the Industrial Revolution, and into this century in many peasant societies, women spent every available moment spinning, weaving, and sewing.


The author, Elizabeth Wayland Barber, demonstrates command of an almost unbelievably disparate array of disciplines — from historical linguistics to archaeology and paleobiology, from art history to the practical art of weaving. Her passionate interest in the subject matter leaps out on every page. Barber, a professor of linguistics and archaeology, developed expert sewing and weaving skills as a small girl under her mother’s tutelage. One could say she had been born and raised to write this book.


Because modern textiles are almost entirely made by machines, we have difficulty appreciating how time-consuming and important the premodern textile industry was. This book opens our eyes to this crucial area of prehistoric human culture.

E.J.W. Barber is Professor of Linguistics and Archaeology at Occidental College and is a handweaver. Prehistoric Textiles won the Millia Davenport Publication Award of the Costume Society of America.

"This monumental study embraces linguistic and archaeological investigations, practical knowledge of weaving, palaeobiology, and other arcane sciences to trace the development of cloth."—Washington Post Book World

"An exhilarating book. As the first comprehensive account of one of humanity's oldest industries, it will be a basic tool for archaeologists."—Helen Hughes Brock, Antiquity