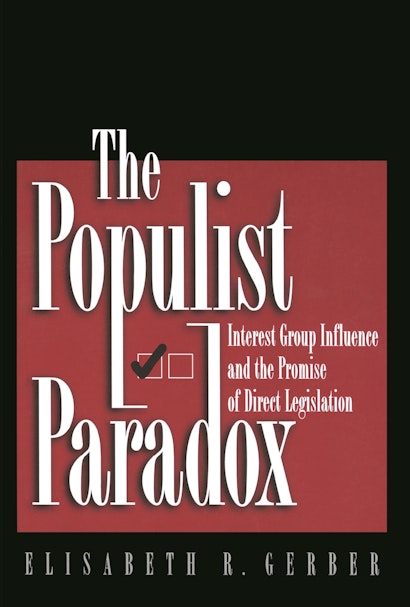 Do small but wealthy interest groups influence referendums, ballot initiatives, and other forms of direct legislation at the expense of the broader public interest? Many observers argue that they do, often lamenting that direct legislation has, paradoxically, been captured by the very same wealthy interests whose power it was designed to curb. Elisabeth Gerber, however, challenges that argument. In this first systematic study of how money and interest group power actually affect direct legislation, she reveals that big spending does not necessarily mean big influence.


Gerber bases her findings on extensive surveys of the activities and motivations of interest groups and on close examination of campaign finance records from 168 direct legislation campaigns in eight states. Her research confirms what such wealthy interests as the insurance industry, trial lawyer associations, and tobacco companies have learned by defeats at the ballot box: if citizens do not like a proposed new law, even an expensive, high-profile campaign will not make them change their mind. She demonstrates, however, that these economic interest groups have considerable success in using direct legislation to block initiatives that others are proposing and to exert pressure on politicians. By contrast, citizen interest groups with broad-based support and significant organizational resources have proven to be extremely effective in using direct legislation to pass new laws. Clearly written and argued, this is a major theoretical and empirical contribution to our understanding of the role of citizens and organized interests in the American legislative process.

Elisabeth R. Gerber, Associate Professor of Political Science at the University of California, San Diego, studies the consequences of U.S. election laws on interest representation. She is currently working on a major study of primary election laws in the American states.

"The questions raised in The Populist Paradox are fundamental to our understanding of elections and representation and to the roles of citizens, organized interests, and elected officials. The book is well written and extremely well organized."—Frank R. Baumgartner, Pennsylvania State University