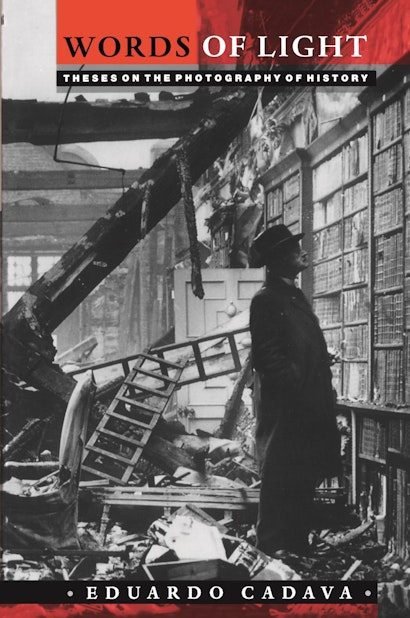 Here Eduardo Cadava demonstrates that Walter Benjamin articulates his conception of history through the language of photography. Focusing on Benjamin’s discussions of the flashes and images of history, he argues that the questions raised by this link between photography and history touch on issues that belong to the entire trajectory of his writings: the historical and political consequences of technology, the relation between reproduction and mimesis, images and history, remembering and forgetting, allegory and mourning, and visual and linguistic representation. The book establishes the photographic constellation of motifs and themes around which Benjamin organizes his texts and thereby becomes a lens through which we can begin to view his analysis of the convergence between the new technological media and a revolutionary concept of historical action and understanding.


Written in the form of theses — what Cadava calls “snapshots in prose” — the book memorializes Benjamin’s own thetic method of writing. It enacts a mode of conceiving history that is neither linear nor successive, but rather discontinuous — constructed from what Benjamin calls “dialectical images.” In this way, it not only suggests the essential rapport between the fragmentary form of Benjamin’s writing and his effort to write a history of modernity but it also skillfully clarifies the relation between Benjamin and his contemporaries, the relation between fascism and aesthetic ideology. It gives us the most complete picture to date of Benjamin’s reflections on history.

Eduardo Cadava is Associate Professor of English at Princeton University. He is the author of Emerson and the Climates of History and coeditor of Who Comes after the Subject?

"Cadava presents a series of sensitive meditations on Benjamin's work, in which, like Benjamin himself, he explores the mass image and its role in the making of popular memory."—The Times Literary Supplement

"Eduardo Cadava is one of the most exciting younger critics working today in literary and cultural studies.... If the future of literary studies depends in no small measure on the capacity of traditional disciplines to adapt and transform themselves, then the significance of Cadava's work can hardly be overestimated."—Sam Weber

"In this careful and caring reading, Eduardo Cadava works with the greatest subtlety through the metaphors of Benjamin's historical imagination, Light, vision, time, trauma—these essential and intangible qualities of life emerge in this luminous essay as a meditation on the writing of history."—Homi Bhabha, author of Nation and Narration