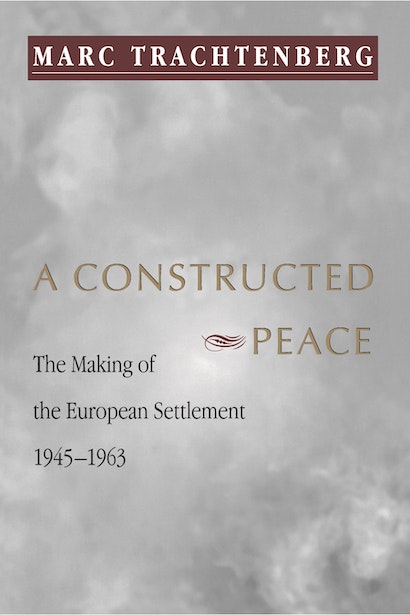 People still think of the Cold War as a simple two-sided conflict, a kind of gigantic arm wrestle on a global scale,” writes Marc Trachtenberg, “but this view fails to grasp the essence of what was really going on.” America and Russia were both willing to live with the status quo in Europe. What then could have generated the kind of conflict that might have led to a nuclear holocaust? This is the great puzzle of the Cold War, and in this book, the product of nearly twenty years of work, Trachtenberg tries to solve it.

The answer, he says, has to do with the German question, especially with the German nuclear question. These issues lay at the heart of the Cold War, and a relatively stable peace took shape only when they were resolved. The book develops this argument by telling a story — a complex story involving many issues of detail, but focusing always on the central question of how a stable international system came into being during the Cold War period. A Constructed Peace will be of interest not just to students of the Cold War, but to people concerned with the problem of war and peace, and in particular with the question of how a stable international order can be constructed, even in our own day.

Marc Trachtenberg is Professor of History at the University of Pennsylvania. He is the author of History and Strategy (Princeton) and Reparation in World Politics: France and European Economic Diplomacy, 1916-1923.

"An authoritative history of the German Question during the first half of the Cold War. . . . [T]he work's originality, and the way its recaptures how issues were linked in the minds of policymakers, makes it the leading general history of the early Cold War in Europe."—Foreign Affairs

"An exhaustive, well-written study of statecraft at the highest levels."—Library Journal

"A powerful, original, and engaging work. Marc Trachtenberg has woven together an enormous array of evidence and information, much of it only recently available to researchers, into a compelling interpretation of an extremely important historical period. Trachtenberg's book is broad as well as deep, and its implications for our understanding of the dynamics of the Cold War extend well beyond the period it examines."—Aaron L. Friedberg, Princeton University

"Marc Trachtenberg's grasp of the finer points of Western internal debates on nuclear weapons and strategy is impressive. His book is an extraordinary piece of research and analysis that may very well set the standard in the field of Cold War studies for years to come."—William Stueck, University of Georgia