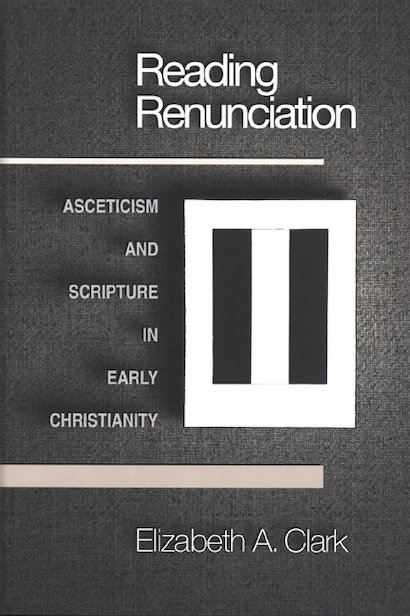 A study of how asceticism was promoted through Biblical interpretation, Reading Renunciation uses contemporary literary theory to unravel the writing strategies of the early Christian authors. Not a general discussion of early Christian teachings on celibacy and marriage, the book is a close examination, in the author’s words, of how “the Fathers’ axiology of abstinence informed their interpretation of Scriptural texts and incited the production of ascetic meaning.”


Elizabeth Clark begins with a survey of scholarship concerning early Christian asceticism that is designed to orient the nonspecialist. Section Two is organized around potentially troubling issues posed by Old Testament texts that demanded skillful handling by ascetically inclined Christian exegetes. The third section, “Reading Paul,” focuses on the hermeneutical problems raised by I Corinthians 7, and the Deutero-Pauline and Pastoral Epistles.


Elizabeth Clark’s remarkable work will be of interest to scholars of late antiquity, religion, literary theory, and history.

Elizabeth A. Clark is John Carlisle Kilgo Professor of Religion at Duke University and the author of several books, including The Origenist Controversy (Princeton). She is the past president of the American Academy of Religion, the American Society of Church History, and the North American Patristics Society. She is the coeditor of the Journal of Early Christian Studies.

"This is a magisterial work. . . . Reading Renunciation will stand the test of scholarly time and remain an essential work in the long tradition of patristic exegesis."—Richard Valantasis, Journal of Religion

"Elizabeth Clark reveals in devastating detail how the ascetic project came to prevail in the culture wars of early Christianity. By an inventive and selective interpretation of the Scriptural texts, later writers made the texts suit their purpose. Through arguments that are dense, supple and exciting, Clark shows us the church fathers ruthlessly exploitating their own foundation texts. This is a magisterial work by a major scholar."—Averil Cameron, Keble College, University of Oxford

"No aspect of the Christian tradition seems more alien to our own sensibilities than the ascetic temper of the late antique Church Fathers. Without diminishing their strangeness, Elizabeth Clark shows us just how they read their Bibles, their bodies, and their world. The book is itself a remarkable act of reading and writing—of 'poaching' and 'founding [her] own place'—informed by a profound knowledge of the ancient texts and by a mastery of postmodern critical theory."—Wayne A. Meeks, Department of Religious Studies, Yale University

"A brilliant exploration of the consequences of late ancient asceticism for the interpretation of the Bible. In her introductory chapter, Elizabeth Clark essentially revises and reverses the regnant historical notion of a peculiarly fourth-century ascetic movement, and argues instead that the ascetic movement has its roots in the very seedbeds of Christianity, indeed in its very Jewish soil. That demonstration alone would be worth the price of admission to this book, but it is only the appetizer, for she goes on to treat in detail and with clarity and verve the consequences of the patristic promotion of celibacy for the interpretation of the Bible. This book is indispensable for students of early Christianity, early Judaism, the Bible and the foundations of western interpretation in general."—Daniel Boyarin, Taubman Professor of Talmudic Culture, University of California at Berkeley