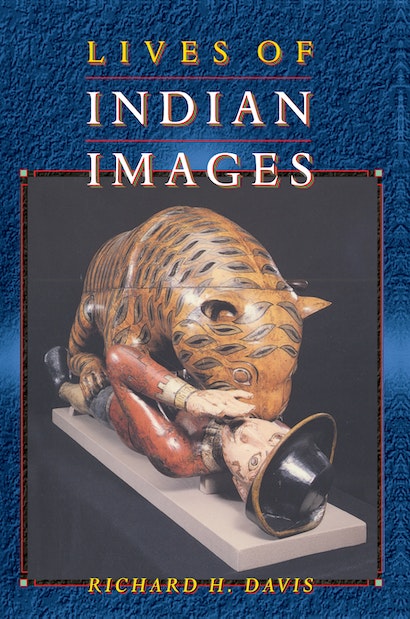 For many centuries, Hindus have taken it for granted that the religious images they place in temples and home shrines for purposes of worship are alive. Hindu priests bring them to life through a complex ritual “establishment” that invokes the god or goddess into material support. Priests and devotees then maintain the enlivened image as a divine person through ongoing liturgical activity: they must awaken it in the morning, bathe it, dress it, feed it, entertain it, praise it, and eventually put it to bed at night. In this linked series of case studies of Hindu religious objects, Richard Davis argues that in some sense these believers are correct: through ongoing interactions with humans, religious objects are brought to life.

Davis draws largely on reader-response literary theory and anthropological approaches to the study of objects in society in order to trace the biographies of Indian religious images over many centuries. He shows that Hindu priests and worshipers are not the only ones to enliven images. Bringing with them differing religious assumptions, political agendas, and economic motivations, others may animate the very same objects as icons of sovereignty, as polytheistic “idols,” as “devils,” as potentially lucrative commodities, as objects of sculptural art, or as symbols for a whole range of new meanings never foreseen by the images’ makers or original worshipers.

"This book offers a new way of discussing images in Indian history that goes beyond the formal analysis of traditional art history."—Choice

"This is the best kind of scholarly book: literate, not without a sense of humor, genuinely informative, pertinent and consequential, and accessible yet highly erudite. A triumph."—The Times Higher Education Supplement

"Davis writes with an elegance not common in scholarly books."—Journal of Asian Studies

"Davis masterfully explores the intersections among possible frames for understanding Indian images.... Essential reading not only for anyone interested in the ways in which cultural interactions have changed over the centuries."—Religious Studies Review

"Richard Davis has again produced a book that is rich with many layers of meaning and beauty, a book that causes the reader to give pause to previous notions about Indian art and the ways in which we view it.... This is a book that could only have been created with vigorous, meticulous research and the pulling together of sources not ordinarily converging in one study."—Critical Review of Books in Religion