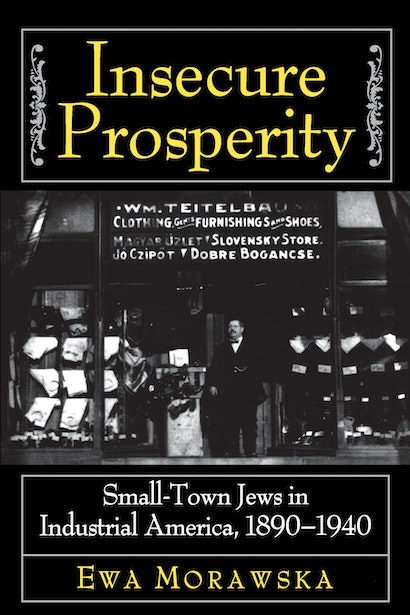 This captivating story of the Jewish community in Johnstown, Pennsylvania reveals a pattern of adaptation to American life surprisingly different from that followed by Jewish immigrants to metropolitan areas. Although four-fifths of Jewish immigrants did settle in major cities, another fifth created small-town communities like the one described here by Ewa Morawska. Rather than climbing up the mainstream education and occupational success ladder, the Jewish Johnstowners created in the local economy a tightly knit ethnic entrepreneurial niche and pursued within it their main life goals: achieving a satisfactory standard of living against the recurrent slumps in local mills and coal mines and enjoying the company of their fellow congregants. Rather than secularizing and diversifying their communal life, as did Jewish immigrants to larger cities, they devoted their energies to creating and maintaining an inclusive, multipurpose religious congregation.


Morawska begins with an extensive examination of Jewish life in the Eastern European regions from which most of Johnstown’s immigrants came, tracing features of culture and social relations that they brought with them to America. After detailing the process by which migration from Eastern Europe occurred, Morawska takes up the social organization of Johnstown, the place of Jews in that social order, the transformation of Jewish social life in the city, and relations between Jews and non-Jews. The resulting work will appeal simultaneously to students of American history, of American social life, of immigration, and of Jewish experience, as well as to the general reader interested in any of these topics.

Ewa Morawska is Professor of Sociology and History at the University of Pennsylvania and the author of a study of Johnstown Slavic immigrants, For Bread with Butter.

"It will be difficult for anyone to assert that the Jewish experience in smaller United States communities is just New York in miniature after reading Ewa Morawska's masterly study.... A magnificent addition to the literature of American Jewish History."—Hyman Berman, Journal of American History

"Nicely supplements studies of the urban American Jewish experience.... [One] comes away from this book impressed by its depth of research and by its socio-historical scope."—The Jerusalem Post

"Ewa Morawska has written a gem of a book ... [an] opalescent mother of pearl with its many nuances.... A new standard for historical and sociological studies of immigrants, small city societies, middle-class culture, and American Jews."—Deborah Dash Moore, Journal of Social History