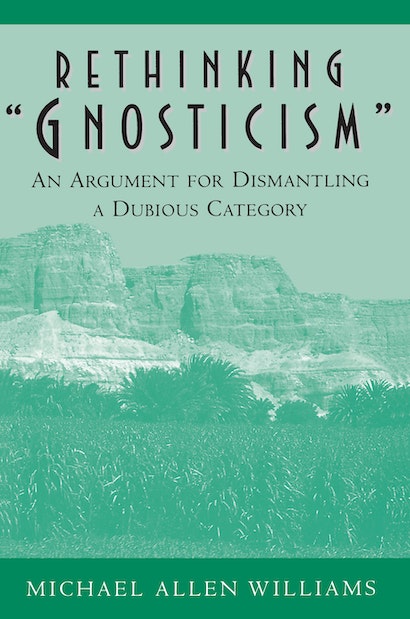 Most anyone interested in such topics as creation mythology, Jungian theory, or the idea of “secret teachings” in ancient Judaism and Christianity has found “gnosticism” compelling. Yet the term “gnosticism,” which often connotes a single rebellious movement against the prevailing religions of late antiquity, gives the false impression of a monolithic religious phenomenon. Here Michael Williams challenges the validity of the widely invoked category of ancient “gnosticism” and the ways it has been described. Presenting such famous writings and movements as the Apocryphon of John and Valentinian Christianity, Williams uncovers the similarities and differences among some major traditions widely categorized as gnostic. He provides an eloquent, systematic argument for a more accurate way to discuss these interpretive approaches.


The modern construct “gnosticism” is not justified by any ancient self-definition, and many of the most commonly cited religious features that supposedly define gnosticism phenomenologically turn out to be questionable. Exploring the sample sets of “gnostic” teachings, Williams refutes generalizations concerning asceticism and libertinism, attitudes toward the body and the created world, and alleged features of protest, parasitism, and elitism. He sketches a fresh model for understanding ancient innovations on more “mainstream” Judaism and Christianity, a model that is informed by modern research on dynamics in new religious movements and is freed from the false stereotypes from which the category “gnosticism” has been constructed.

Michael Allen Williams is Professor of Comparative Religion at the University of Washington, and is currently chair of the Department of Near East Languages and Civilization. He is also the author of The Immovable Race: A Gnostic Designation and the Theme of Stability in Late Antiquity and co-editor, with Collett Cox and Martin Jaffee, of Innovation in Religious Traditions: Essays in the Interpretation of Religious Change.

"Rare is the book on gnosticism that is thoroughly grounded in the primary sources in the ancient languages, widely conversant with the secondary literature, controlled and sophisticated in its historical method—and still intelligible and interesting, not only for experts in its field, but also for religious historians and educated readers in general. Michael Williams's Rethinking `Gnosticism' is such a book. It is essential reading for scholars of ancient Christianity and for anyone who wishes to use the terms `gnostic' and `gnosticism,' but it can be read with profit by all historians concerned with issues of methodology in studying religious people of the past."—Church History

"There can hardly be a category more misused in contemporary scholarly and not-so-scholarly discourse than `gnosticism,' so it was probably inevitable that a serious scholar would come along with an argument for the abandonment of the category altogether. In this provocative book Williams does just that."—Religious Studies Review

"Michael Williams presents the first treatment of gnosticism in book form that endeavors, and succeeds, to get out of beaten tracks by questioning the very definition and description of this phenomenon. He conducts a detailed analysis of the clichés that have been in circulation for decades and shows convincingly how they have contributed to a distorted and biased approach to the sources. This book will be epoch-making for the field of gnostic studies and should attract a very large reading audience."—Paul-Hubert Poirier, Université Laval