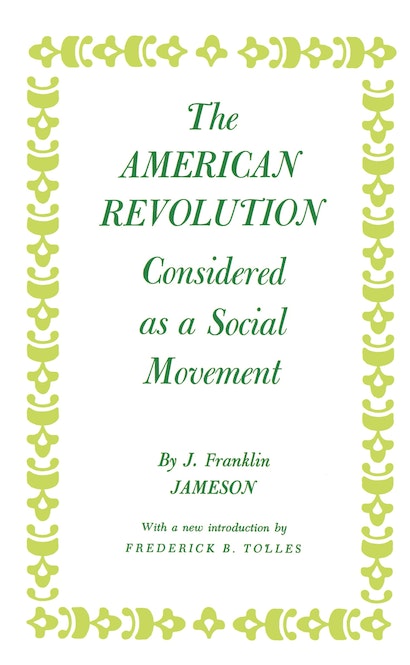 Written when political and military history dominated the discipline, J. Franklin Jameson’s The American Revolution Considered as a Social Movement was a pioneering work. Based on a series of four lectures he gave at Princeton University in 1925, the short book argued that the most salient feature of the American Revolution had not been the war for independence from Great Britain; it was, rather, the struggle between aristocratic values and those of the common people who tended toward a leveling democracy. American revolutionaries sought to change their government, not their society, but in destroying monarchy and establishing republics, they in fact changed their society profoundly. Jameson wrote, “The stream of revolution, once started, could not be con.ned within narrow banks, but spread abroad upon the land.?


Jameson’s book was among the first to bring social analysis to the fore of American history. Examining the effects the American Revolution had on business, intellectual and religious life, slavery, land ownership, and interactions between members of different social classes, Jameson showed the extent of the social reforms won at home during the war. By looking beyond the political and probing the social aspects of this seminal event, Jameson forced a reexamination of revolution as a social phenomenon and, as one reviewer put it, injected a “liberal spirit” into the study of American history. Still in print after nearly eighty years, the book is a classic of American historiography.