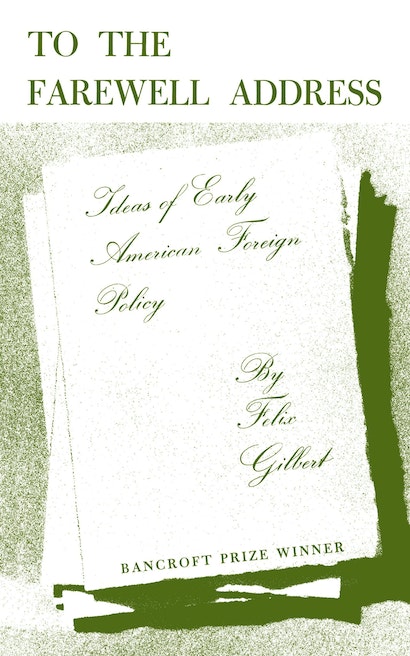 Washington’s Farewell Address comprises various aspects of American political thinking. It reaches beyond any period limited in time and reveals the basic issue of the American attitude toward foreign policy: the tension between Idealism and Realism. Settled by men who looked for gain and by men who sought freedom, born into independence in a century of enlightened thinking and of power politics, America has wavered in her foreign policy between Idealism and Realism, and her great historical moments have occurred when both were combined. Thus the history of the Farwell Address forms only part of the wider, endless, urgent problem. Felix Gilbert analyzes the diverse intellectual trends which went into the making of the Farwell Address, and sheds light on its beginnings.

Felix Gilbert, a professor in the School of Historical Studies at the Institute for Advanced Study, Princeton, New Jersey, is also the author of Machiavelli and Guicciardini, editor of Hitler Directs His War, and coeditor of The Diplomats.

"Professor Gilbert has had what the French call a 'genial idea' and he has developed it brilliantly. Washington's 'Farewell Address' is one of the sacred American texts and, even more than the Declaration of Independence or the Constitution, it has the aura of having been handed down from Sinai or read from the chariot before Washington-Elijah took off. Its precepts sank deep into the American mind and evoked a response still far from dead. . . . With learning and skill Professor Gilbert has put the Address in the class to which it belongs, that of the 'political testament,' of which the most famous eighteenth-century example in Europe was provided by Frederick the Great. And, as Professor Gilbert points out, Washington's testament was the most important because the most revered and obeyed."—Times Literary Supplement

"To the Farewell Address is a study of European influences in the ideology of those who developed American foreign policy as expressed in Washington's Farewell Address. . . . While this study is primarily addressed to professional historians and other students of history, it is of the greatest practical importance to all who desire to take a more intelligent interest in the nature of the aspirations and motives, the hopes and fears, that characterize the complex society of which contemporary America consists. Neither sociologists nor political philosophers, nor even American theologians, should neglect this book, which will delight historians by its professional excellence. The scholarly apparatus includes the text of various drafts of the Address as well as a distinguished bibliographical essay."—The Personalist