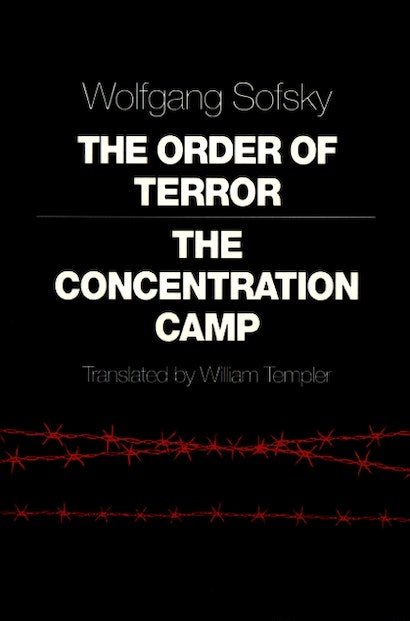 During the twelve years from 1933 until 1945, the concentration camp operated as a terror society. In this pioneering book, the renowned German sociologist Wolfgang Sofsky looks at the concentration camp from the inside as a laboratory of cruelty and a system of absolute power built on extreme violence, starvation, “terror labor,” and the business-like extermination of human beings.


Based on historical documents and the reports of survivors, the book details how the resistance of prisoners was broken down. Arbitrary terror and routine violence destroyed personal identity and social solidarity, disrupted the very ideas of time and space, perverted human work into torture, and unleashed innumerable atrocities. As a result, daily life was reduced to a permanent struggle for survival, even as the meaning of self-preservation was extinguished. Sofsky takes us from the searing, unforgettable image of the Muselmann — Auschwitz jargon for the “walking dead” — to chronicles of epidemics, terror punishments, selections, and torture.


The society of the camp was dominated by the S.S. and a system of graduated and forced collaboration which turned selected victims into accomplices of terror. Sofsky shows that the S.S. was not a rigid bureaucracy, but a system with ample room for autonomy. The S.S. demanded individual initiative of its members. Consequently, although they were not required to torment or murder prisoners, officers and guards often exploited their freedom to do so — in passing or on a whim, with cause, or without.


The order of terror described by Sofsky culminated in the organized murder of millions of European Jews and Gypsies in the death-factories of Auschwitz and Treblinka. By the end of this book, Sofsky shows that the German concentration camp system cannot be seen as a temporary lapse into barbarism. Instead, it must be conceived as a product of modern civilization, where institutionalized, state-run human cruelty became possible with or without the mobilizing feelings of hatred.

Wolfgang Sofsky is an Associate Professor of Sociology at the University of Göttingen. The Order of Terror was awarded the prestigious 1993 Geschwister-Scholl Prize. The book has also been published in France and Italy. Sofsky is the author of four other books in German about power, organization, and the anthropology of violence. William Templer is a widely published translator of German and Hebrew and teaches on the staff of Preslavsky University, Shumen, Bulgaria.

"[Sofsky] shows the structure of the concentration camp as a complex place of modern civilization. What he has achieved will take your breath away. . . . He has written a book which will fundamentally enrich our knowledge of human nature, the organization of power, and the execution of terror."—Der Spiegel

"A work of impeccable scholarship, a definitive history of what has come to epitomize the ultimate evil."—Booklist

"[Sofsky] manages to characterize a piece of social reality that functioned according to special laws and that can only become apparent from an internal description. . . . This book will shortly take its place among the indispensable standard works [in the field]."—Die Zeit

"A thorough study of the harrowing dynamics of terror, violence, and absolute power in the Nazi concentration camps. . . . impeccably researched . . . A detailed, rigorous sociological analysis of the incomprehensible."—Kirkus Reviews

"Sofsky patiently shows how virtually everything in the camps, from their physical layout to the use of time to the categorization of prisoners, was a way of exercising and consolidating absolute power over an increasingly dehumanized prisoner population. An important study."—Library Journal

"This is a work of impeccable scholarship, a definitive history of what has come to epitomize the ultimate evil."—Booklist

"[A] brilliant book. . . Sofsky. . . takes the sheer physical reality of the camps as a given and asks how they functioned. It is, he implies, insufficient just to document the existence of evil. We also have an obligation. . . to understand the small details and everyday structure of its dynamics."—Alan Wolfe, Commonweal

"In his important study of the hierarchy of the concentration camp, Wolfgang Sofsky shows how power in the camps was based on seniority, politics, and race."—The New York Review of Books

"A cool and systematic exposition of many important features of the camp experience.... The great strengths of his book are its analytical rigour and elegant structure, and the skillful use of both original sources and survivor testimonies."—Michael Burleigh, The Times Literary Supplement

"What Sofsky tells us about human behavior in extreme situations is profoundly disturbing, and his book should be read by anyone who wishes to gain a deeper understanding not only of Nazi terror, but also of the dark potential of modern society."—Omer Bartov, The New Republic

"This is an extraordinary and brilliantly written book.... Brilliant sociology that testifies to the endurance of the human spirit."—Sociology

"What [Sofsky] has achieved will take your breath away.... He has written a book that will fundamentally enrich our knowledge of human nature, the organization of power, and the execution of terror."—Der Spiegel

"Wolfgang Sofsky dares the near impossible: he gives us a rational description of the concentration camp without losing sight of the human suffering, which the use of terror brought with it. . . . Sofsky exposes the potential of immorality that modern times carries within itself, and how the ordinary can transform itself into terror."—Ralf Dahrendorf