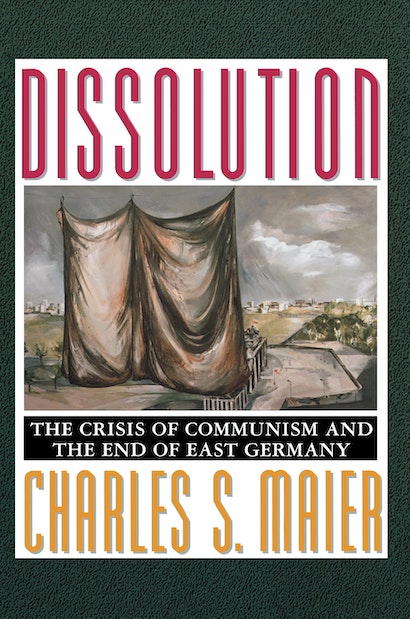 Against the backdrop of one of the great transformations of our century, the sudden and unexpected fall of communism as a ruling system, Charles Maier recounts the history and demise of East Germany. Dissolution is his poignant, analytically provocative account of the decline and fall of the late German Democratic Republic.


This book explains the powerful causes for the disintegration of German communism as it constructs the complex history of the GDR. Maier looks at the turning points in East Germany’s forty-year history and at the mix of coercion and consent by which the regime functioned. He analyzes the GDR as it evolved from the purges of the 1950s to the peace movements and emerging youth culture of the 1980s, and then turns his attention to charges of Stasi collaboration that surfaced after 1989. In the context of describing the larger collapse of communism, Maier analyzes German elements that had counterparts throughout the Soviet bloc, including its systemic and eventually terminal economic crisis, corruption and privilege in the SED, the influence of the Stasi and the plight of intellectuals and writers, and the slow loss of confidence on the part of the ruling elite. He then discusses the mass protests and proliferation of dissident groups in 1989, the collapse of the ruling party, and the troubled aftermath of unification.

Dissolution is the first book that spans the communist collapse and the ensuing process of unification, and that draws on newly available archival documents from the last phases of the GDR, including Stasi reports, transcripts of Politburo and Central Committee debates, and papers from the Economic Planning Commission, the Council of Ministers, and the office files of key party officials. This book is further bolstered by Maier’s extensive knowledge of European history and the Cold War, his personal observations and conversations with East Germans during the country’s dramatic transition, and memoirs and other eyewitness accounts published during the four-decade history of the GDR.

Charles S. Maier teaches history at Harvard University. He is Krupp Foundation Professor of European Studies, Director of the Minda de Gunzburg Center for European Studies, and Chairman of the Committee on Degrees in Social Studies. His books include Recasting Bourgeois Europe: Stabilization in France, Germany, and Italy in the Decade after World War I and The Unmasterable Past: History, Holocaust, and German National Identity.

"This monumental study is. . . [a] definitive work on the transition from communism."—Library Journal

"A densely written scholarly analysis, the best I have read, of how and why the Communist regime in East Germany came apart and disappeared. . . . [Maier's] account of the decrepit East German economy is not likely to be surpassed. . . . [H]is account of the transition from socialism to democracy in Germany is vastly more informative and insightful than any of the innumerable analyses of post-Communist 'transition' now being published."—Tony Judt, New York Review of Books

"[Dissolution] is history in the full sense of the word. Maier does not just piece together the events leading to the breaching of the wall and the rush to reunification. He searches constantly for the meaning of this history."—Foreign Affairs

"Charles S. Maier, the distinguished Harvard historian who witnessed events as they unfolded in Berlin in 1989 and 1990, has now answered the most fascinating question concerning the process of unification: How did the dissolution of the GDR come about? . . . Maier traces the dissolution of the GDR both in minute detail and with the wisdom acquired from long experience with the subject. His answer to the question of why it happened is clear: 'Communism self-destructed'. . . . Maier tells the story of the East German revolution with his characteristic blend of well-documented historiography and shrewd analysis."—Ralf Dahrendorf, Los Angeles Times Book Review

"Charles Maier has composed an elegant essay, blending semi-philosophical speculations with personal memories of the 'dissolution' of East Germany. . . . His aim is to present the narrative of the last days of the GDR in as sweeping a framework as possible: not just of the general failure of Communism, but also as a reflection of a profound shift of late twentieth-century society, towards complexity."—Harold James, The Times Literary Supplement

"We are fortunate that a scholar of Maier's scope has disentangled the mass of fact, fear and pretense surrounding this unprecedented event, and has given thought to its implications."—Richard C. Hottelet, The New Leader

"Anybody wanting to know the real story of East Germany's flawed system and its anguished fall could do no better than read the volume by Charles Maier. . . ."—The Economist

"Dissolution is the best available one-volume account of East Germany's decline and fall. . . . Maier has written a historical synthesis of the economic crisis, popular unrest and diplomatic negotiations that disrupted and then destroyed East Germany and with staggering speed opened the way for its unification with the Federal Republic."—James J. Sheehan, The New York Times Book Review

"Like someone digging crumpled pieces of paper out of the wastepaper basket and straightening them out to try and decipher their contents, Maier picks the GDR, or rather its last months, out of the rubbish bin of Communism."—Christoph Bertram, London Review of Books

"Charles Maier's account of the transition from socialism to democracy in Germany is vastly more informative and insightful than any of the innumerable analyses of post-Communist `transition' now being published."—Tony Judt, The New York Review of Books

"A superb, subtly intelligent politico-historical analysis of the roles of Gorbachev's Soviet Union, East Germany, and West Germany (with the U.S. pulling the strings) in the demise of an era."—Nadine Gordimer [Nobel Prize Laureate], Financial Times

"A brilliant analysis of the process which he calls `dissolution.' Maier believes, and shows, that Communism self-destructed."—Ralf Dahrendorf, History Today

"Undoubtedly the most important survey of the GDR and its demise. Readers will find not only an engaging narrative of events but also coverage on broad topics ranging from an analysis of the 'old guard' to post-unification nostalgia. Throughout every facet of this book, we hear Maier's philosophically sophisticated 'voice' leading us through dilemmas created by values, economic realities, political clashes, and cultural ruptures."—Claudia Koonz, Duke University

"This is a beautifully written and insightful account of the collapse of the East German regime. It poses important general questions about inevitability and agency in history, and is especially good in analyzing the mood of the East German population itself. It is a wonderfully thoughtful book."—Paul M. Kennedy, Yale University