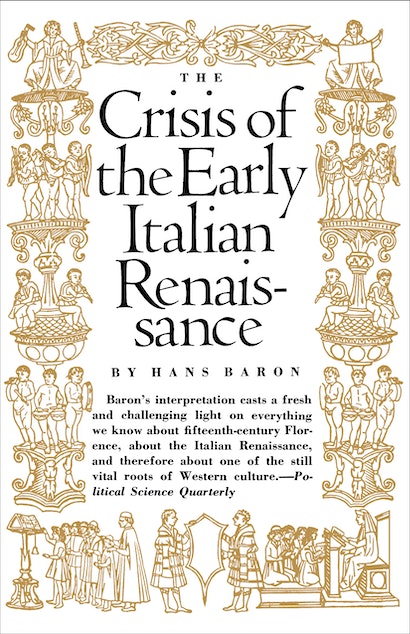 Hans Baron was one of the many great German émigré scholars whose work Princeton brought into the Anglo-American world. His Crisis of the Early Italian Renaissance has provoked more discussion and inspired more research than any other twentieth-century study of the Italian Renaissance.

Baron’s book was the first historical synthesis of politics and humanism at that momentous critical juncture when Italy passed from medievalism to the thought of the Renaissance. Baron, unlike his peers, married culture and politics; he contended that to truly understand the Renaissance one must understand the rise of humanism within the political context of the day. This marked a significant departure for the field and one that changed the direction of Renaissance studies. Moreover, Baron’s book was one of the first major attempts of any sort to ground intellectual history in a fully realized historical context and thus stands at the very origins of the interdisciplinary approach that is now the core of Renaissance studies.

Baron’s analysis of the forces that changed life and thought in fifteenth-century Italy was widely reviewed domestically and internationally, and scholars quickly noted that the book “will henceforth be the starting point for any general discussion of the early Renaissance.” The Times Literary Supplement called it “a model of the kind of intensive study on which all understanding of cultural process must rest.” First published in 1955 in two volumes, the work was reissued in a one-volume Princeton edition in 1966.