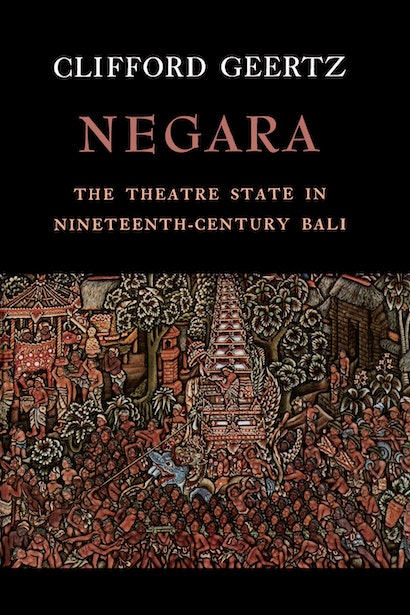 Combining great learning, interpretative originality, analytical sensitivity, and a charismatic prose style, Clifford Geertz has produced a lasting body of work with influence throughout the humanities and social sciences, and remains the foremost anthropologist in America.

His 1980 book Negara analyzed the social organization of Bali before it was colonized by the Dutch in 1906. Here Geertz applied his widely influential method of cultural interpretation to the myths, ceremonies, rituals, and symbols of a precolonial state. He found that the nineteenth-century Balinese state defied easy conceptualization by the familiar models of political theory and the standard Western approaches to understanding politics.

Negara means “country” or “seat of political authority” in Indonesian. In Bali Geertz found negara to be a “theatre state,” governed by rituals and symbols rather than by force. The Balinese state did not specialize in tyranny, conquest, or effective administration. Instead, it emphasized spectacle. The elaborate ceremonies and productions the state created were “not means to political ends: they were the ends themselves, they were what the state was for…. Power served pomp, not pomp power.” Geertz argued more forcefully in Negara than in any of his other books for the fundamental importance of the culture of politics to a society.

Much of Geertz’s previous work — including his world-famous essay on the Balinese cockfight — can be seen as leading up to the full portrait of the “poetics of power” that Negara so vividly depicts.

"The main purpose of Geertz's study is to delineate the general structure of the Negara by focusing on one particularly well-documented case, that of Bali in the era preceding the Dutch invasion of 1906. The outcome is a fascinating and remarkable book."—The New York Review of Books