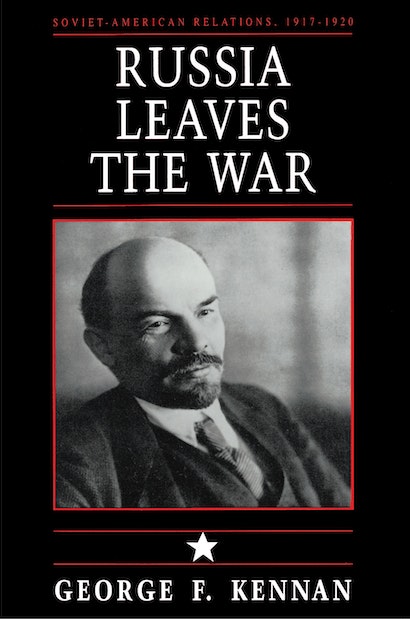 Winner of the Pulitzer Prize in History, the National Book Award for Nonfiction, the George Bancroft Prize, and the Francis Parkman Prize, this absorbing volume explores the complexities of the Soviet-American relationship between the November Revolution of 1917 and Russia’s final departure in March 1918 from the ranks of the warring powers.

These four months, which witnessed the Bolshevik Revolution and Russia’s departure from the warring powers, set the stage for future relations between the two emerging superpowers. Volume 2 of Soviet American Relations, entitled The Decision to Intervene (Princeton, 1958), explored U.S. intervention in northern Russia and Siberia between 1918 and 1920.The distinguished scholar and public servant George F. Kennan opens the way to an understanding not only of these events but of the subsequent pattern of Soviet-American relations and the complex process of international diplomacy generally.

Kennan became the U.S. government’s key analyst of the Soviet Union after a two-year stint in the Foreign Service there (1944-1946), which had been preceded by service in the American embassy in Moscow before World War II. His “long telegram” to his superiors at the State Department, written in 1946 and published a year later in revised form in Foreign Affairs as the famous “X” article, was perhaps the most influential statement in the early years of the Cold War.

After leaving the Foreign Service, Kennan joined the faculty at the School for Historical Studies at the Institute for Advanced Study in Princeton, where he wrote Russia Leaves the War and subsequent books.