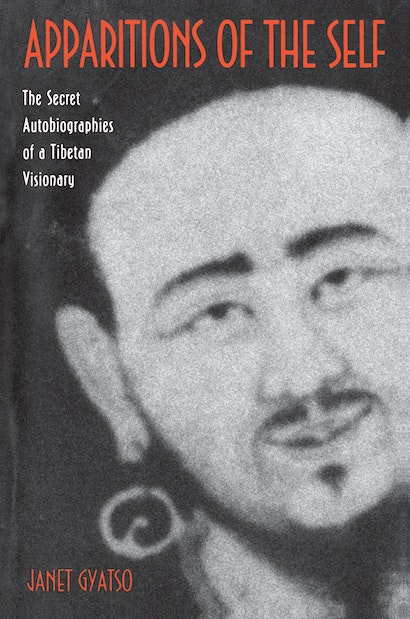 Apparitions of the Self is a groundbreaking investigation into what is known in Tibet as “secret autobiography,” an exceptional, rarely studied literary genre that presents a personal exploration of intimate religious experiences. In this volume, Janet Gyatso translates and studies the outstanding pair of secret autobiographies by the famed Tibetan Buddhist visionary, Jigme Lingpa (1730-1798), whose poetic and self-conscious writings are as much about the nature of his own identity, memory, and the undecidabilities of autobiographical truth as they are narrations of the actual content of his experiences. Their translation in this book marks the first time that works of this sort have been translated in a Western language.


Gyatso is among the first to consider Tibetan literature from a comparative perspective, examining the surprising fit — as well as the misfit — of Western literary theory with Tibetan autobiography. She examines the intriguing questions of why Tibetan Buddhists produced so many autobiographies (far more than other Asian Buddhists) and how autobiographical self-assertion is possible even while Buddhists believe that the self is ultimately an illusion. Also explored are Jigme Lingpa’s historical milieu, his revelatory visions of the ancient Tibetan dynasty, and his meditative practices of personal cultivation. The book concludes with a study of the subversive female figure of the “Dakini” in Jigme Lingpa’s writings, and the implications of her gender, her sexuality, and her unsettling discourse for the autobiographical subject in Tibet.

Janet Gyatso is Associate Professor of Religion at Amherst College. She is the editor of In the Mirror of Memory: Reflections on Mindfulness and Remembrance in Indian and Tibetan Buddhism.

"It is only one of the many virtues of Janet Gyatso's Apparitions of the Self that it gives us, at last, a full portrait of a Buddhist saint in all his self-admitted complexity and ambiguity.... Lucid and literate.... Significant points to ponder, and subtle arguments to which to respond."—Journal of Asian Studies

"Gyatso surveys this landscape from a host of perspectives, adding to her Buddhalogical expertise a sensitivity to literary theory and comparative studies. Her sharp intelligence and thorough consideration are evident on every page. This book will attract readers from as many disciplines as Gyatso herself so effectively musters."—Religious Studies Review

"This exceptional volume combines concise and felicitous translation with clear commentary and insightful analysis.... What lends considerable interest to this work is the comparison Gyatso ... makes between Tibetan literature and Western literary theory.... [Apparitions of the Self] serves as a model of innovative scholarship."—Choice

"In this ambitious book, Janet Gyatso breaks new ground in the field of cross-cultural comparisons of autobiography. . . . Providing clear, poetic translations of very difficult material, Gyatso offers a glimpse into an unusual genre of autobiography. . . . [She] has accomplished a difficult task at rendering the translations of Jigme Lingpa into clear, readable, English poetry and prose and elucidating their meaning in Western theoretical terms. Her use of Western theories of autobiographical self-representation and dissimulation shed valuable light on a heretofore impenetrable subject of Tibetan literature. . . . This book provides an important contribution to Buddhist studies and to autobiographical studies."—The Journal of Religion