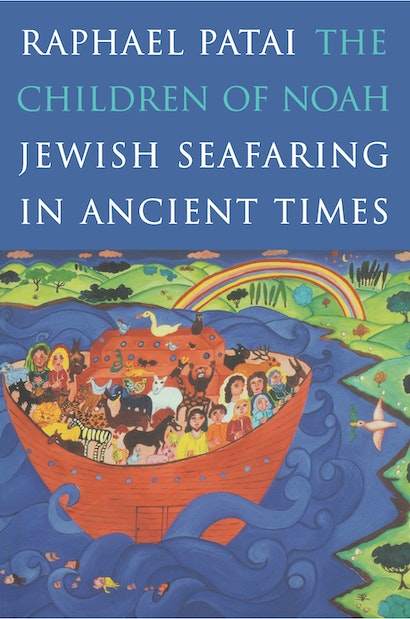 Here the late Raphael Patai (1910-1996) recreates the fascinating world of Jewish seafaring from Noah’s voyage through the Diaspora of late antiquity. In a work of pioneering scholarship, Patai weaves together Biblical stories, Talmudic lore, and Midrash literature to bring alive the world of these ancient mariners. As he did in his highly acclaimed book The Jewish Alchemists, Patai explores a subject that has never before been investigated by scholars. Based on nearly sixty years of research, beginning with study he undertook for his doctoral dissertation, The Children of Noah is literally Patai’s first book and his last. It is a work of unsurpassed scholarship, but it is accessible to general readers as well as scholars.


An abundance of evidence demonstrates the importance of the sea in the lives of Jews throughout early recorded history. Jews built ships, sailed them, fought wars in them, battled storms in them, and lost their lives to the sea. Patai begins with the story of the deluge that is found in Genesis and profiles Noah, the father of all shipbuilders and seafarers. The sea, according to Patai’s interpretation, can be seen as an image of the manifestation of God’s power, and he reflects on its role in legends and tales of early times. The practical importance of the sea also led to the development of practical institutions, and Patai shows how Jewish seafaring had its own culture and how it influenced the cultures of Mediterranean life as well. Of course, Jewish sailors were subject to the same rabbinical laws as Jews who never set sail, and Patai describes how they went to extreme lengths to remain in adherence, even getting special emendations of laws to allow them to tie knots and adjust rigging on the Sabbath.

The Children of Noah is a capstone to an extraordinary career. Patai was both a careful scholar and a gifted storyteller, and this work is at once a vivid history of a neglected aspect of Jewish culture and a treasure trove of sources for further study. It is a stimulating and delightful book.

Raphael Patai was the author of more than thirty books on Jewish history, folklore, biblical studies, and Middle Eastern culture. Among his best-known books are The Jewish Alchemists (Princeton), The Jewish Mind, The Hebrew Goddess, and Hebrew Myths (with Robert Graves).

"It's not everyone who can spend a lifetime with the kinds of questions Patai asks.... But almost everyone will find fascinating the answers Patai provides.... Practical rather than theoretical, empirical rather than imperious, durable rather than glamorous ... a vessel with spirit, a freighter of mysteries."—Laurance Wieder, The Weekly Standard

"Patai takes the bare bones of what there is in the Bible and, through scholarship and intellect, builds up a lively picture of life at sea.... This book will stand as a final and fitting monument to Patai's lifetime of scholarship and research into ancient Jewish history and culture."—David Brauner, Jerusalem Post

"An artful weaving together of biblical tales, Talmudic legends, and Midrash literature, The Children of Noah: Jewish Seafaring in Ancient Times chronicles the amphibious adventures of the ancient Israelites."—Publishers Weekly

"A lively and fascinating narrative that makes a full exposition of the subject available to students and advanced readers for the first time."—Library Journal

"This work is altogether a masterpiece of substance and style. It is not only a major contribution to our knowledge of the ancient world. . .but it is as well a sheer reading delight for humanists of all backgrounds."—Howard M. Sachar, George Washington University