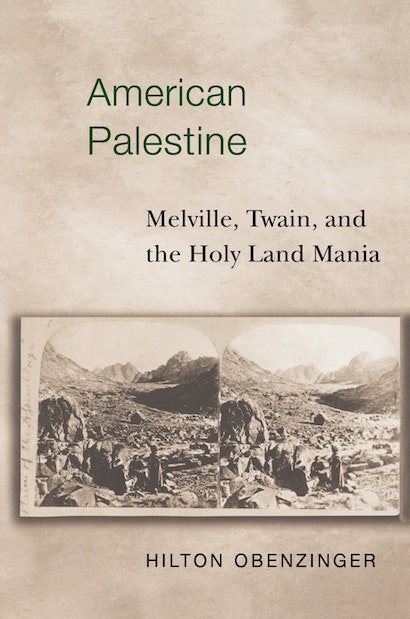 In the nineteenth century, American tourists, scholars, evangelists, writers, and artists flocked to Palestine as part of a “Holy Land mania.” Many saw America as a New Israel, a modern nation chosen to do God’s work on Earth, and produced a rich variety of inspirational art and literature about their travels in the original promised land, which was then part of Ottoman-controlled Palestine. In American Palestine, Hilton Obenzinger explores two “infidel texts” in this tradition: Herman Melville’s Clarel: A Poem and Pilgrimage to the Holy Land (1876) and Mark Twain’s The Innocents Abroad: or, The New Pilgrims’ Progress (1869). As he shows, these works undermined in very different ways conventional assumptions about America’s divine mission.


In the darkly philosophical Clarel, Melville found echoes of Palestine’s apparent desolation and ruin in his own spiritual doubts and in America’s materialism and corruption. Twain’s satiric travelogue, by contrast, mocked the romantic naiveté of Americans abroad, noting the incongruity of a “fantastic mob” of “Yanks” in the Holy Land and contrasting their exalted notions of Palestine with its prosaic reality. Obenzinger demonstrates, however, that Melville and Twain nevertheless shared many colonialist and orientalist assumptions of the day, revealed most clearly in their ideas about Arabs, Jews, and Native Americans.


Combining keen literary and historical insights and careful attention to the context of other American writings about Palestine, this book throws new light on the construction of American identity in the nineteenth century.

Hilton Obenzinger is a critic, novelist, and poet. Winner of the American Book Award, his previous works include New York on Fire and Cannibal Eliot and the Lost Histories of San Francisco. He teaches American literature and writing at Stanford University.

"Obenzinger writes with insight, authority, and great thoroughness. And his historical backgrounding is consistently interesting, entertaining, and instructive. American Palestine contains one of the most searching critiques I know of the complexities of dissent in Melville's work. There is no better survey of Americans abroad in the Gilded Age and no sharper analysis of the West-as-metaphor in Twain's work. American Palestine is a distinguished contribution to American literary and cultural studies."—Sacvan Bercovitch, Charles H. Carswell Professor of English and American Literature, Harvard University

"American Palestine is a study of the way that the cultural obsession with 'Palestine' helped to define America's settler-colonial identity both before and after the Civil War and thus kept alive its own expansionist energies. Obenzinger turns an extraordinarily improbable, not to say problematic, comparison and contrast between Melville and Twain into a splendid examination of the nineteenth-century American metaphysics of Holy Land-loving."—Giles Gunn, University of California, Santa Barbara