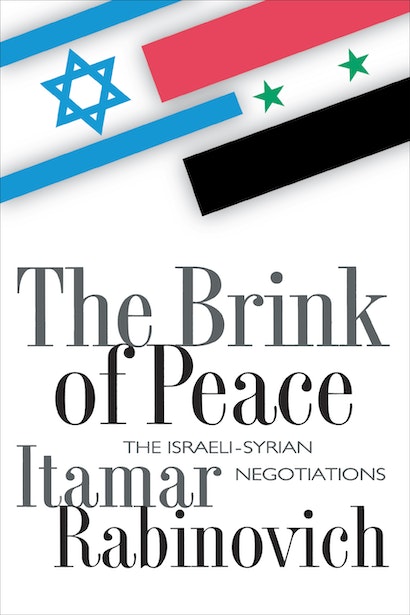 A major casualty of the assassin’s bullet that struck down Israeli Prime Minister Yitzhak Rabin was a prospective peace accord between Syria and Israel. For the first time, a negotiator who had unique access to Rabin, as well as detailed knowledge of Syrian history and politics, tells the inside story of the failed negotiations. His account provides a key to understanding not only U.S. diplomacy in the Middle East but also the larger Arab-Israeli peace process.


During the period from 1992 to 1996, Itamar Rabinovich was Israel’s ambassador to Washington, and the chief negotiator with Syria. In this book, he looks back at the course of negotiations, terms of which were known to a surprisingly small group of American, Israeli, and Syrian officials. After Benjamin Netanyahu’s election as Israel’s prime minister in May 1996, a controversy developed. Even with Netanyahu’s change of policy and harder line toward Damascus, Syria began claiming that both Rabin and his successor Peres had pledged full withdrawal from the Golan Heights. Rabinovich takes the reader through the maze of diplomatic subtleties to explain the differences between hypothetical discussion and actual commitment.


“To the students of past history and contemporary politics,” he writes, “nothing is more beguiling than the myriad threads that run across the invisible line which separates the two.” The threads of this story include details of Rabin’s negotiations and their impact through two subsequent Israeli administrations in less than a year, the American and Egyptian roles, and the ongoing debate between Syria and Israel on the factual and legal bases for resuming talks.


The author portrays all sides and participants with remarkable flair and empathy, as only a privileged player in the events could do. In any assessment of future negotiations in the Middle East, Itamar Rabinovich’s book will prove indispensable.

Itamar Rabinovich is Professor of History at Tel Aviv University, where he holds the Yona and Dina Ettinger Chair in the Contemporary History of the Middle East, and A. D. White Professor-at-Large at Cornell University. Among his books are The War for Lebanon: 1970-1985, Israel in the Middle East, and The Road Not Taken: Early Arab-Israeli Negotiations.

"Rabinovich ably traces the road that Israel and Syria have traveled, and shows what may lie ahead."—Clyde Haberman, The New York Times Book Review

"A model of its genre: a book in which an aware participant provides both the inside skinny and the larger story-both the details known only to those who were there and the historical context . . . neither burdening the reader with unnecessary information nor skimping on important facts."—Daniel Pipes, The Weekly Standard

"Provocative and insightful. . . . This book is a worthy read for those interested in this conflict beyond the superficial."—Booklist

"This valuable, well-written, objective description and analysis of an important issue will appeal to general readers of international politics as well as to students of Middle Eastern affairs."—Choice

"This saga of missed opportunities holds valuable lessons for those seeking peace in the Middle East."—Publishers Weekly

"Rabinovich writes clearly and fair-mindedly about the views of both sides; his readers gain a ringside seat at Arab-Israeli diplomacy at its most difficult."—Kirkus Reviews

"The Brink of Peace is essential reading for anyone wanting to grasp the realities of the Israeli-Syrian negotiations that were the focus of U.S. Middle Eastern policy during President Clinton's first term. A brilliant diplomat with a broad knowledge of Syrian diplomatic history, former Israeli Ambassador Rabinovich guides us through the twists, turns, and ultimate frustration of his dogged efforts on behalf of peace. Written with gusto and clarity, his book combines scholarly depth with the unique perspective of a direct, key participant in the negotiations. My State Department colleagues and I felt privileged to work with the author on a regular basis for four years, and his graphic account is an important contribution to the scholarship on the vital issue of peace in the Middle East."—Warren Christopher, former U.S. Secretary of State

"A book for multiple audiences: scholars of diplomacy, the constituency of Arab and Israeli affairs, students of American diplomacy of the Clinton years, and literate people who want a narrative that goes behind the scenes of diplomacy. It is a flawless work.... Professor Rabinovich, after a distinguished career, has written his best work so far."—Fouad Ajami, The Paul H. Nitze School of Advanced International Studies, The Johns Hopkins University