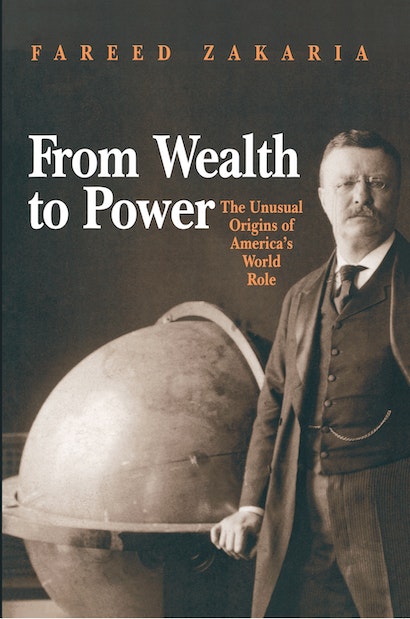 What turns rich nations into great powers? How do wealthy countries begin extending their influence abroad? These questions are vital to understanding one of the most important sources of instability in international politics: the emergence of a new power. In From Wealth to Power, Fareed Zakaria seeks to answer these questions by examining the most puzzling case of a rising power in modern history — that of the United States.


If rich nations routinely become great powers, Zakaria asks, then how do we explain the strange inactivity of the United States in the late nineteenth century? By 1885, the U.S. was the richest country in the world. And yet, by all military, political, and diplomatic measures, it was a minor power. To explain this discrepancy, Zakaria considers a wide variety of cases between 1865 and 1908 when the U.S. considered expanding its influence in such diverse places as Canada, the Dominican Republic, and Iceland. Consistent with the realist theory of international relations, he argues that the President and his administration tried to increase the country’s political influence abroad when they saw an increase in the nation’s relative economic power. But they frequently had to curtail their plans for expansion, he shows, because they lacked a strong central government that could harness that economic power for the purposes of foreign policy. America was an unusual power — a strong nation with a weak state. It was not until late in the century, when power shifted from states to the federal government and from the legislative to the executive branch, that leaders in Washington could mobilize the nation’s resources for international influence.


Zakaria’s exploration of this tension between national power and state structure will change how we view the emergence of new powers and deepen our understanding of America’s exceptional history.

Fareed Zakaria is Managing Editor of Foreign Affairs, a contributing editor to Newsweek, and has been Adjunct Professor of Political Science at Columbia University. He is a contributor to various publications, including the New York Times, the Times Literary Supplement, International Security, and Slate and is coeditor of The American Encounter: The United States and the Making of the Modern World.

"[From Wealth to Power's] tightly argued thesis addresses a question sure to be revisited.... Its conclusions are both provocative and full of implications for the world today."—Walter A. McDougall, The New York Times Book Review

"Mr. Zakaria persuasively illustrates [his] argument by examining America's emergence as a great power.... [His] account of turn-of-the-century American diplomacy is concise and insightful."—Aaron L. Friedberg, The Wall Street Journal

"A significant contribution to the study of international relations."—Choice

"Beautifully conceived; dazzlingly executed: Zakaria's theoretical penetration is matched by his mastery of the process of America's coming of age as a great power. The book casts a bright light on the past and the future—and the future of international politics."—Kenneth N. Waltz, Institute of War and Peace Studies, Columbia University

"The theory of state-centered realism set forth in From Wealth to Power is the most important innovation in foreign policy theory.... This book shows how theory and history can be combined to improve the former and illuminate the latter. It is a superb example of qualitative social science analysis."—Samuel P. Huntington, Director, John M. Olin Institute for Strategic Studies, Harvard University