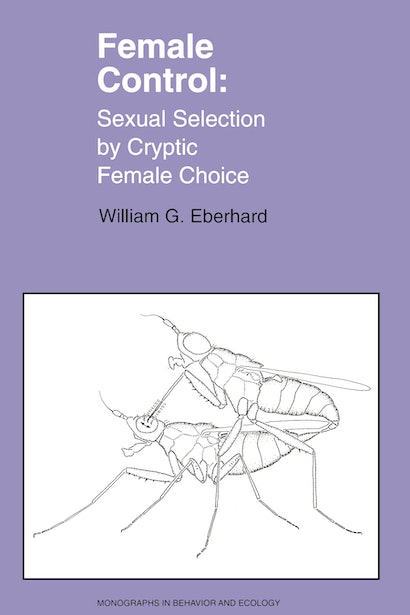 A growing body of evidence has begun to reveal flaws in the traditional assumption of female passivity and lack of discrimination after copulation has begun. William Eberhard has compiled an impressive array of research on the ability of females to shape the outcome of mating. He describes studies of many different cryptic mechanisms by which a female can accept a male for copulation but nevertheless reject him as a father. Evidence from various fields indicates that such selectivity by females may be the norm rather than the exception. Because most post-copulatory competition between males for paternity is played out within the bodies of females, female behavior, morphology, and physiology probably often influence male success in these contests. Eberhard draws examples from a diversity of organisms, ranging from ctenophores to scorpions, nematodes to frogs, and crickets to humans.


Cryptic female choice establishes a new bridge between sexual selection theory and reproductive physiology, in particular the physiological effects of male seminal products on female reproductive processes, such as sperm transport, oviposition, and remating. Eberhard interweaves his review of previous studies with speculation on the consequences of this theoretical development, and indicates promising new directions for future research.

William G. Eberhard is a member of the scientific staff of the Smithsonian Tropical Research Institute, and Professor of Biology at the Escuela de Biologia of the Universidad de Costa Rica. He is the author of Sexual Selection and Animal Genitalia.

"This book could change the way you think about females . . . [It] is an easy, well-organized read. . . . Female Control makes it clear that females surely must have partial or complete control over some aspects of reproduction. . . . [It] is destined to be an influential book, and deserves to be a citation classic."—American Zoologist