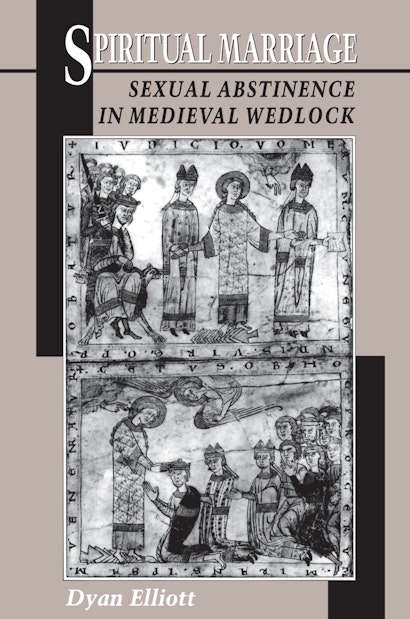 The early Christian and medieval practice of spiritual marriage, in which husband and wife mutually and voluntarily relinquish sexual activity for reasons of piety, plays an important role in the development of the institution of marriage and in the understanding of female religiosity. Drawing on hagiography, chronicles, theology, canon law, and pastoral sources, Dyan Elliott traces the history of spiritual marriage in the West from apostolic times to the beginning of the sixteenth century.

Dyan Elliott is Assistant Professor of History and Adjunct of Women's Studies at Indiana University.

"[Dyan Elliott] reveals the deep tensions and ambiguities about sexuality and marriage in the Christian church as attitudes evolved from apostolic times to the sixteenth century. . . . I loved this book for its magnificent scholarship, clarity of expression, provocative ideas, and scholarly modesty."—Penelope D. Johnson, American Historical Review

"A penetrating study for a wide scholarly audience on the place of women, marriage, and sexuality in Christianity from Augustine to the Renaissance. . . . Using spiritual marriage as a prism, Elliott is able to examine the themes of sacramental theology, female spirituality, sin, sexuality, and gender relations."—Philip F. Riley, History

"Elliot masterfully examines why female spirituality was perceived as a threat to the church and society at large, challenging the boundaries of sanctity and heresy. . . . By tracing the downward trajectory of holy women through medieval society's progressive reliance on inquisitional procedure, Elliot argues that inquisitional mechanisms for assessing female spirituality created confusion between the saintly and the heretical; these efforts to constrain female spirituality were part of a larger program of constraining women."—Choice

"This is a singular accomplishment. I am not only rapt with admiration at Dyan Elliott's achievement but greatly in her debt for the contribution she makes to our understanding of the Christian sexual tradition."—John Boswell, Yale University