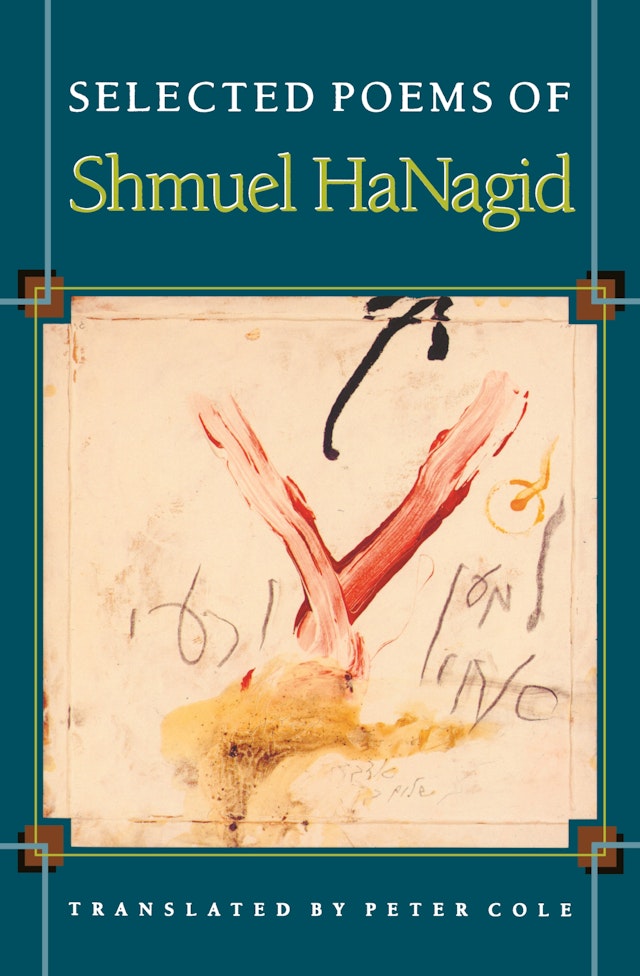 The first major poet of the Hebrew literary renaissance of Moslem Spain, Shmuel Ben Yosef Ha-Levi HaNagid (993-1056 c.e.) was also the Prime Minister of the Muslim state of Granada, battlefield commander of the non-Jewish Granadan army, and one of the leading religious figures in a medieval Jewish world that stretched from Andalusia to Baghdad. Peter Cole’s groundbreaking versions of HaNagid’s poems capture the poet’s combination of secular and religious passion, as well as his inspired linking of Hebrew and Arabic poetic practice. This annotated Selected Poems is the most comprehensive collection of HaNagid’s work published to date in English.

“The Multiple Troubles of Man”

The multiple troubles of man,
my brother, like slander and pain,
amaze you? Consider the heart
which holds them all
in strangeness, and doesn’t break.

I’d suck bitter poison from the viper’s mouth
and live by the basilisk’s hole forever,
rather than suffer through evenings with boors,
fighting for crumbs from their table.

Peter Cole is the author of Rift, a collection of poems.

". . .a wonder of poetic alchemy. [Cole's] deftly cadenced translations embody, as Pound demanded, 'trace of that power which implies the man'. They are delicately poised between fidelity to the Hebrew and an ear finely-tuned to the possibilities of a modern, poetic idiom in English . . . At last HaNagid's gift resonates for the English reader."—Poetry Nation Review

"Cole's vigorous inventive translation is equal to the task of rendering the work of a poet whose range encompassed commerce and God, war and wine. HaNagid emerges as a man of identifiably modern—even enlightened—breadth, even as the rest of Europe languished in its Dark Ages."—Publishers Weekly

"Taut, light-footed translations . . . remarkable in the degree to which they carry over the distinct poetic complexities of the original while retaining a crisp, contemporary sense of American poetics . . . the quality of motion and emotion comes through directly."—Village Voice Literary Supplement

". . . magnificent . . . offers a comprehensive and rich selection of HaNagid's poems . . . Cole has paid close attention to the rhythm and syntax of the Hebrew distich, and he reconstructs them with exemplary grace in his English lines. In the quatrains and shorter poems he incorporates a scattering of full rhyme, though always with a light touch, and in some poems he introduces surprising ruptures and daring enjambments into the syntactic flow, imparting a resilience and tension to the text that were missing in the work of his predecessors."—Ha'aretz

"[Cole's HaNagid] represents the admission of the Hebrew Golden Age into the world of general literature. And high time, too."—Commentary

"Samuel the Nagid astonishes as a personality, and when read does not disappoint. Cole's generous offering of verse translations brings to the English reader the full range of the Nagid's poetry: accounts of the terrors and exultations of war; poems about love and lovely, frail pleasures; poems of grief; considerations of mortality . . . and snappy epigrams on society and the human condition . . . a fine, breathing, contemporary version of an old master."—Prooftexts

"Translating HaNagid is an immense challenge . . . yet Cole, a Jerusalem poet, meets the challenge. The poems are melodic with the music of English . . . The images are fresh without being anachronistic. Excellent notes explain not only the Biblical, but the Arabic borrowings."—The Jerusalem Report

"Cole . . . brings to this work his exquisite sensitivity to matters of art and Judaism. The poems are delightful and significant still, across the ages."—Conservative Judaism

"I do not believe that the miracle of . . . Hebrew rebirth in Andalusia could find a more attractive English version today."—Zvi Yagendorf, Ariel

"Here is indeed a remarkable event . . . the unearthing of a major and until today mostly ignored Andalusian Hebrew poet . . . The poetry itself sings as it once did in another language, culture, and time, thanks to Peter Cole's erudition and poetic sensibility. Not only are major translation problems overcome by intelligence and sensitivity, but the introduction provides informative observations concerning both the Arabic and Hebrew poetic traditions in Moslem Spain. These are poems to be remembered, especially since, in working through conflicting theories of translations, they have perfectly managed to avoid all the current pitfalls, all the circumlocutions and tricks."—Award Citation, 1998 MLA-Scaglione Prize for Translation

"These very fine translations of the work of a remarkable medieval poet gain their authority as much from the literary gifts of the poet-translator as from his linguistic and historical knowledge. They convince us by their strong and supple appeal to the ear, as well as by their diction. For the English-speaking reader, this volume of lyric, epigram and epic narrative brings a treasure to light in the way it deserves to be presented."—John Hollander, Yale University