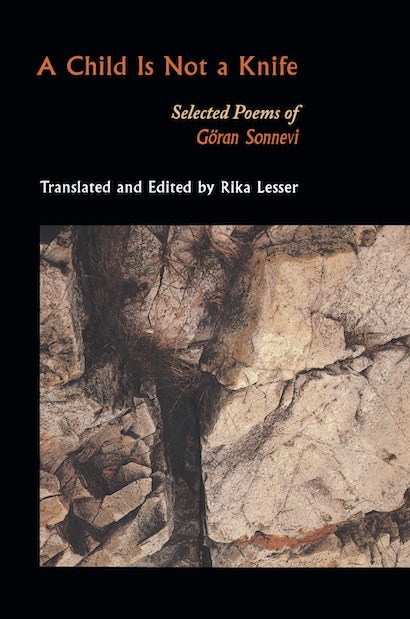 Göran Sonnevi is one of Sweden’s most celebrated, respected, and prolific poets. For this first book-length selection of Sonnevi to appear in English, Rika Lesser has chosen works written between 1971 and 1989 — although most of the poems come from the last decade and from Sonnevi’s last three books, which form part of the single oändlig [unending/infinite/interminable] poem that he continues to write from book to book. Of Lesser’s introduction to the work, Richard Howard writes, “Lesser’s wonderful prose texts at the outset provide not only an ingress into complex and baffling matter but one of the most determined statements of the translator’s text since Walter Benjamin.”

Göran Sonnevi has written twelve books of poems and assembled and revised collections of his poems (most of which are in print in Sweden in mass-market paperback editions). Rika Lesser is a poet and has translated numerous works of poetry, including a selection of the poems of Rilke, Rilke: Between Roots (Princeton). For a group of poems from A Child Is Not a Knife, she received the Poetry Society of America's George Bogin Memorial Award in 1992 and the American Scandinavian Foundation's

"Göran Sonnevi's presence in Swedish poetry of this century is a powerful one. He holds to creatures such as birds and worms and to the patterns of politics with the same passion. He won't turn his eyes away from the delights of sensual married life or the horror of capitalism. At his best, he is a sensuous, ethical poet, a surprising union. Rika Lesser's translations are skillful and true."—Robert Bly

"Through the power of Rika Lesser's brilliant translations, Göran Sonnevi's poetry is shown to be what it is: the work of one of the world's major poets."—Lawrence Joseph