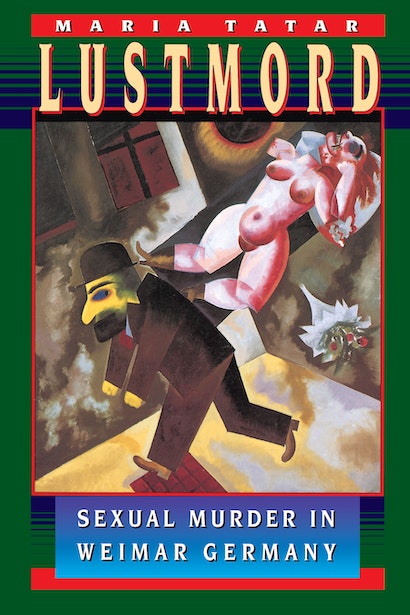 In a book that confronts our society’s obsession with sexual violence, Maria Tatar seeks the meaning behind one of the most disturbing images of twentieth-century Western culture: the violated female corpse. This image is so prevalent in painting, literature, film, and, most recently, in mass media, that we rarely question what is at stake in its representation. Tatar, however, challenges us to consider what is taking place — both artistically and socially — in the construction and circulation of scenes depicting sexual murder. In examining images of sexual murder (Lustmord), she produces a riveting study of how art and murder have intersected in the sexual politics of culture from Weimar Germany to the present.


Tatar focuses attention on the politically turbulent Weimar Republic, often viewed as the birthplace of a transgressive avant-garde modernism, where representations of female sexual mutilation abound. Here a revealing episode in the gender politics of cultural production unfolds as male artists and writers, working in a society consumed by fear of outside threats, envision women as enemies that can be contained and mastered through transcendent artistic expression. Not only does Tatar show that male artists openly identified with real-life sexual murderers — George Grosz posed as Jack the Ripper in a photograph where his model and future wife was the target of his knife — but she also reveals the ways in which victims were disavowed and erased.


Tatar first analyzes actual cases of sexual murder that aroused wide public interest in Weimar Germany. She then considers how the representation of murdered women in visual and literary works functions as a strategy for managing social and sexual anxieties, and shows how violence against women can be linked to the war trauma, to urban pathologies, and to the politics of cultural production and biological reproduction.


In exploring the complex relationship between victim and agent in cases of sexual murder, Tatar explains how the roles came to be destabilized and reversed, turning the perpetrator of criminal deeds into a defenseless victim of seductive evil. Throughout the West today, the creation of similar ideological constructions still occurs in societies that have only recently begun to validate the voices of its victims. Maria Tatar’s book opens up an important discussion for readers seeking to understand the forces behind sexual violence and its portrayal in the cultural media throughout this century.

Maria Tatar is Professor of German at Harvard University. She is the author of Off with Their Heads! Fairy Tales and the Culture of Childhood, The Hard Facts of the Grimm's Fairy Tales, and Spellbound: Mesmerism and Literature, all published by Princeton University Press.

"A compelling chronicle of Weimar Germany's disturbing and pervasive fascination with the sexually motivated murder of women, Lustmord breaks new ground in our understanding of German art and culture during this turbulent period between the two world wars.... Tatar has written a brilliant book of art and cultural criticism, a book that scholars and theorists of the Weimar period will have to contend with for some years to come."—Patrice Petro, Art in America

"Tatar's book is particularly relevant today, amid the heated debates over violence, even as the images become more brutal and sensational, and the camera more voyeuristic and merciless."—Barbara Kosta, The Women's Review of Books

"A profound and provocative contribution to our understanding of sexual combat and the aestheticization of violence in modern culture."—Leslie Kitchen, The Bloomsbury Review

"Lustmord is an unsettling study, rich both in documentation and speculation, that will change the way we look at Weimar as well as contemporary art. . . . All this in prose that is all the more enviable for its precision, lucidity, and pithiness."—William Collins Donahue, German Politics and Society

"Not for the first time—though seldom so brilliantly as in Tatar's slender book—fascism and modernism are conjoined; they correspond; they are letters from the same camp."—John Leonard, The Nation

"Tatar investigates the chilling motives behind representations that aestheticize violence, and that turn the mutilated female body into an object of fascination. . . . Above all, she explores the complex relationship between gender roles, sexuality, violence and representation. . . . Tatar's book is particularly relevant today, amid the heated debates over violence, even as the images become more brutal and sensational, and the camera more voyeuristic and merciless. The story of sexual murder is all too common—and not just during the brief period of the Weimar Republic. It's precisely the commonplace nature of such brutal and misogynistic crimes that Maria Tatar seeks to expose."—Barbara Kosta, The Women's Review of Books

"This volume is intriguing, puzzling, illuminating, and depressing."—Andrew Lees, The Historian

"A remarkable book. [It] is both a study of German avant-garde and modernist art and a sustained reflection on the relationships between gender, crime, violence and representation. . . . Lustmord breaks new ground in our understanding of German art and culture during this turbulent period between the two world wars. . . . A brilliant book of art and cultural criticism. . . ."—Patrice Petro, Art in America

"A brilliant and energetic exploration of a subject that has gone for too long ignored, a profound and provocative contribution to our understanding of sexual combat and the aestheticization of violence in modern culture."—Leslie Kitchen, The Bloomsbury Review

"Taking the representation of sexually motivated murder (Lustmord) as a site where questions of gender, social order, and culture converge, Maria Tatar demonstrates the symptomatic social and cultural importance of sex crimes in pre-Hitler Germany. She successfully weaves historical facts (the murders that happened) and their artistic representations into a fascinating new story that emphasizes the dark and suppressed side of Weimar culture. This story has amazingly far-reaching consequences not only for legal and sociological discussions, but also for considerations of gender relations, social control, modernity, and urban pathology in general."—Anton Kaes, University of California, Berkeley

"Maria Tatar's book on the culture of serial murder in Weimar Germany breaks new ground in interdisciplinary studies. An important book for all who are interested in the nightside of Weimar. A must book for art historians and literary and cultural historians."—Sander Gilman, University of Chicago

"Maria Tatar has written a compelling book about Weimar's obsessions: sexual psychopaths, serial murder, homosocial desire, and violence toward women. We have come to understand the crisis of male identities after the lost war as a breeding ground for German fascism, but Lustmord raises fascinating new questions about the relationship between the trauma of warfare and a sexualized imaginary of violence and mutilation that haunted Weimar art, literature, and film. A major contribution to cultural studies."—Andreas Huyssen, Columbia University

"Maria Tatar offers a compelling illumination of Weimar culture's fascination with sexual murder, as this produced visual and narrative representations that turn the criminal perpetrator into a cultural hero while the victim—usually feminine—is eclipsed. With an unflinching eye she astutely negotiates the duplicity of aversion and attraction that representations of violence elicit. Her stunning analysis keeps returning to the fluid boundaries between real-life murderers and their cultural renditions, forcing the reader continually to address his or her own complicity with fantasies of violence."—Elisabeth Bronfen, University of Zurich