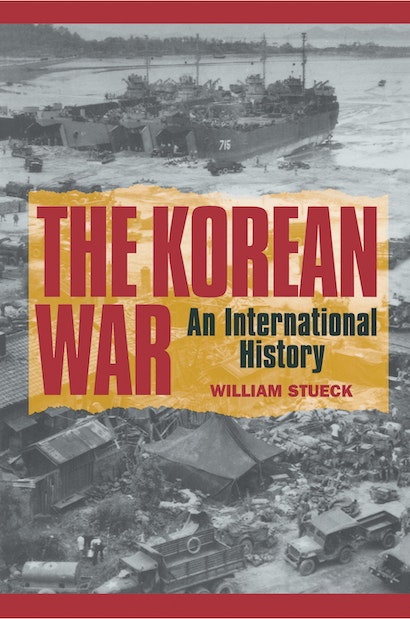 This first truly international history of the Korean War argues that by its timing, its course, and its outcome it functioned as a substitute for World War III. Stueck draws on recently available materials from seven countries, plus the archives of the United Nations, presenting a detailed narrative of the diplomacy of the conflict and a broad assessment of its critical role in the Cold War. He emphasizes the contribution of the United Nations, which at several key points in the conflict provided an important institutional framework within which less powerful nations were able to restrain the aggressive tendencies of the United States.


In Stueck’s view, contributors to the U.N. cause in Korea provided support not out of any abstract commitment to a universal system of collective security but because they saw an opportunity to influence U.S. policy. Chinese intervention in Korea in the fall of 1950 brought with it the threat of world war, but at that time and in other instances prior to the armistice in July 1953, America’s NATO allies and Third World neutrals succeeded in curbing American adventurism. While conceding the tragic and brutal nature of the war, Stueck suggests that it helped to prevent the occurrence of an even more destructive conflict in Europe.

William Stueck is Professor of History at the University of Georgia. Among his works is The Road to Confrontation: American Policy toward China and Korea, 1947-1950.

"Stueck has canvassed research libraries in North America, England, and Australia to give us what must stand as the most complete and intelligent international history of the war yet written."—Lloyd Gardner, Reviews in American History

"Any serious student of the Korean War will want to read this book for its measured perspectives and concern to contextualize its subject."—Jeffrey Grey, Journal of Military History

"Stueck has written an impressive, large-scale synthesis of the entire conflict.... [He] excels at describing the intricate diplomatic maneuverings that took place throughout the war, and that were aimed at avoiding a major clash between the great powers."—David Rees, The National Interest

"International history does not come much better than this. . . . William Stueck has scoured archives on four continents to produce the most comprehensive, authoritative, and judicious single-volume treatment of the politics and diplomacy of the first major armed clash of the Cold War. . . . The book is a tour de force."—H.W. Brands, Pacific Historical Review

"A comprehensive and illuminating analysis and review of the Korean War—the war that in many ways defined the future of international relations, and in particular the American role in those relations."—The Honorable Paul H. Nitze, Former Arms Control Negotiator